The history of the star: Sualocin

from p.200 of Star Names, Richard Hinckley Allen, 1889.
[A scanned copy can be viewed on this webpage

Alpha (α) Delphinus, Sualocin, is a pale yellow star in the Dolphin. The name “Sualocin” is “Nicolaus” spelled backwards. 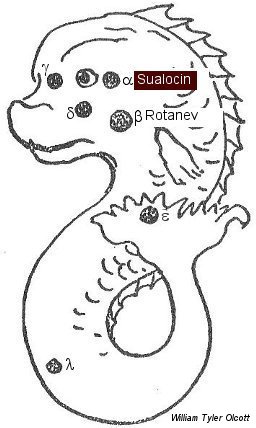 The strange names Sualocin for alpha (α) Delphinus and Rotanev for beta (β) Delphinus first appeared for these stars in the Palermo Catalogue of 1814, and long were a mystery to all, and {p.201} seemingly a great puzzle to the English astronomer Smyth (1788-1865), which he perhaps never solved, although he was very intimate with the staff of the Palermo Observatory. The English astronomer Thomas Webb (1807-1885), however, discovered their origin by reversing the component letters, and so reading Nicolaus Venator, the Latinized form of Niccolo Cacciatore, the name of the assistant and successor of Giuseppe Piazzi, Italian astronomer (1746-1826).

Hindus located in Delphinus the 22d nakshatra, Cravishtha, “Most Favorable”, also called Dhanishtha, “Richest” the Vasus, “Bright or Good Ones”, being the regents of this asterism, which was figured as a Drum or Tabor (source of English ‘tambour’ and tambourine’): beta (Rotanev) marking the junction with Catabishaj.

The Arabic title for Delphinus was Al Ka’ud, the Riding Camel, the early Christians — the Melkite and Nestorian sects — considered it the Cross of Jesus transferred to the skies after his crucifixion; but in Kazwini’s (13th century) day the learned of Arabia called alpha (Sualocin), beta, gamma, and delta Al ‘Ukud, “the Pearls or Precious Stones” adorning Al Salib, by which title the common people knew this Cross; the star epsilon, towards the tail, being Al ‘Amud al Salib, the Pillar of the Cross.

But the Arabian astronomers adopted the Greek figure as their Dulfim, which one of their chroniclers described as “a marine animal friendly to man, attendant upon ships to save the drowning sailors.”

The constellation of Delphinus is associated with the story of Amphitrite, the goddess of the sea, because the dolphin persuaded her to become the wife of Neptune, and Delphinus was known as Persuasor Amphitrites, as well as Neptunus and Triton

Hindus located in Delphinus the 22d nakshatra, Cravishtha, “Most Favorable”, also called Dhanishtha, “Richest” the Vasus, “Bright or Good Ones”, being the regents of this asterism, which was figured as a Drum or Tabor (source of English ‘tambour’ and ‘tambourine’): beta (Rotanev) marking the junction with Catabishaj.

Influences of 22nd Hindu mansion: Ruled by Mars. A mutable asterism belonging to the serving caste and favorable for commencing work of an impermanent or moving character. Those born on the lunar day will be shameless, rich, generous, women haters and will have few friends. With Moon here at birth native will be wealthy, liberal, fond of music, valiant, niggardly. Rules mills and the excretory system. [Robson, p.84]

The astrological influences of the constellation Delphinus

Legend: When Amphitrite, who was sought as a wife by Neptune, hid herself, the God sent messengers to find her. The dolphin was the first to succeed and persuaded her to consent to the marriage, for which service Neptune placed him in the heavens. According to other accounts it is one of the pirates who were changed into dolphins by Bacchus on his voyage to Ariadne. [Robson, p.42.]

Influences: According to Ptolemy, Delphinus is like Saturn and Mars [according to Noonan the bright stars Rotanev and Sualocin are Mercury-Jupiter]. It gives a simple appearance, cheerfulness, dissembling and duplicity, love of hunting, and sport in general but little happiness [little happiness and love of hunting might not apply to Rotanev and Sualocin, because they are of Mercury/Jupiter nature]. There is a fondness for pleasure, ecclesiastical matters and travel, but danger of suffering from ingratitude. [Robson, p.43.]

The astrological influences of the constellation Delphinus given by Manilius:

“The sea-dark Dolphin ascends from the Ocean to the heavens and emerges with its scales figured by stars, birth is given to children who will be equally at home on land and in the sea. For just as the dolphin is propelled by its swift fins through the waters, now cleaving the surface, now the depths below, and derives momentum from its undulating course, wherein it reproduces the curl of waves, so whoever is born of it will speed through the sea. Now lifting one arm after the other to make slow sweeps he will catch the eye as he drives a furrow of foam through the sea and will sound afar as he thrashes the waters; now like a hidden two-oared vessel he will draw apart his arms beneath the water; now he will enter the waves upright and swim by walking and, pretending to touch the shallows with his feet, will seem to make a field of the surface of the sea; else, keeping his limbs motionless and lying on his back or side, he will be no burden to the waters but will recline upon them and float, the whole of him forming a sail-boat not needing oarage.

“Other men take pleasure in looking for the sea in the sea itself: they dive beneath the waves and try to visit Nereus and the sea nymphs in their caves; they bring forth the spoils of the sea and the booty that wrecks have lost to it, and eagerly search the sandy bottom.

From their different sides swimmers and divers share an equal enthusiasm for both pursuits, for their enthusiasm, though displayed in different ways, springs from a single source.

“With them you may also reckon men of cognate skill who leap in the air, thrown up from the powerful spring-board, and execute a see-saw movement, the first’s descent throwing up the second and the plunge of the second lifting the first on high; or hurl their limbs through the fire of flaming hoops, imitating the dolphin’s movement in their flight through space, and land as gently on the ground as they would in the watery waves: they fly though they have no wings and sport amid the air.

Even if the Dolphin’s sons lack these skills, they will yet possess a physique suited to them; nature will endow them with strength of body, briskness of movement, and limbs which fly over the plain” [Manilius, Astronomica, 1st century AD, book 5, p.335].