The history of the star: Sheratan

from p.81 of Star Names, Richard Hinckley Allen, 1889.
[A scanned copy can be viewed on this webpage 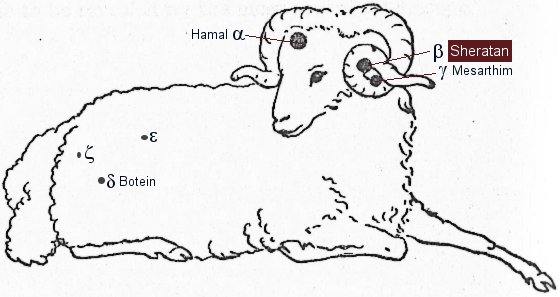 Beta (β) Aries, Sheratan, is a pearly white star in the left horn of the Ram.

Sharatan and Sheratan are from Arabic Al Sharatain, the dual form of Al Sharat, a Sign, referring to this and gamma (γ Mesarthim), the third star in the head, as a sign of the opening year; Sheratan (β) having marked the vernal equinox in the days of {p.82} Hipparchos (c.190 – c.125 BC), about the time when these stars were named. The 17th century German astronomer Bayer’s Sartai is from this dual word.

These were the 1st manzil (Arabic Moon Mansion) in the Persian astronomer Al Biruni ‘s (973-1048 A.D.) list, the earlier 27th, but some added alpha (α Hamal) to the combination, calling it Al Ashrat in the plural; the 17th century English orientalist Thomas Hyde saying that the unnamed star lambda (λ) Aries also was included. Al Natih was another name for this lunar station, as the chief components are near the horns of Aries.

Beta (β Sheratan) and gamma (γ Mesarthim) constituted the 27th nakshatra (Hindu Moon Mansion) A çvini (or Ashvini), the Ashwins, or Horsemen, the earlier dual A çvinau (or Ashvinau) and A çvayujau, the Two Horsemen, corresponding to the Gemini of Rome, but figured as a Horse’s Head, alpha (α Hamal) sometimes was added to this lunar station, but beta (β, this star Sheratan) always was the junction star with the adjoining Bharani. About 400 years before our era this superseded Krittika (the Pleiades in Taurus) as leader of the nakshatras (Hindu Moon Mansions). They were the Persian Padevar, the Protecting Pair; the Sogdian Iranian’s Bashish, the Protector; and the equivalent Coptic people of Egypt Pikutorion; while in Babylonia, according to the German orientalist Epping, they marked the second ecliptic constellation Mahru-sha-rishu-ku, the Front of the Head of Ku.

Alpha (α Hamal), beta (β this star Sheratan), and gamma (γ) were the corresponding sieu (Chinese Lunar Mansion) Leu, or Low, the Train of a garment, beta (β Mesarthim) being the determinant.

[Allen says under Mesarthim p.82;] Alpha (Hamal), beta (this star Sheratan), and gamma (Mesarthim) may have been the Jewish Shalisha, — more correctly Shalish, — some musical instrument of triangular shape, a title also of Triangulum. And they formed one of the several Athafiyy, Trivets or Tripods; this Arabic word indicating an arrangement of three stones on which nomads placed a kettle, or pot, in an open-air kitchen; others being in Draco, Orion, Musca, and Lyra

Beta (β Sheratan) and gamma (γ Mesarthim) constituted the 27th nakshatra (Hindu Moon Mansion) A çvini (or Ashvini), the Ashwins, or Horsemen, the earlier dual A çvinau (or Ashvinau) and A çvayujau, the Two Horsemen, corresponding to the Gemini of Rome, but figured as a Horse’s Head, alpha (α Hamal) sometimes was added to this lunar station, but beta (β, this star Sheratan) always was the junction star with the adjoining Bharani. Robson says the Regents were the Asvini Devas. Ruled by the Dragon’s Tail. This mansion superseded Krittika (the Pleiades in Taurus) as leader at about 400 B.C.

Influences of the 27th Hindu Moon Mansion Asvini: It is a light asterism belonging to the Vaisya caste (farmers and merchants) and favorable for sales, art, sculpture, learning, marital love, wearing of ornament, medicine and purchase of carriages when containing the Moon. Those born on the lunar day will be physicians, military commanders and dealers in horses. With Moon here at birth native will be polite, fond of ornaments, handsome, popular and intelligent. Rules towns and the upper part of the feet. [Robson p.86.]

Influences: Ptolemy’s observations are as follows: “The stars in the head of Aries possess an influence similar in its effects to that of Mars and Saturn: those in the mouth act similarly to Mercury, and in some degree to Saturn; those in the hinder foot, to Mars; those in the tail, to Venus.” By the Kabalists Aries is associated with the Hebrew letter He and the 5th Tarot Trump “The Pope.” [Robson, p.31.]

“All the Aries stars have been in the sign Taurus for 200-300 years now. Hamal just over 600 (Botein actually entered Taurus in year 505AD), and in this same period we have seen large-scale aggression change its nature from barbaric raiding and migration of earlier centuries to the building of large empires which had to be administered and kept in peace and good order, as well as exploited by their conquerors. This is typical both of the sign Taurus and of the planet Saturn”. [The Living Stars, Dr. Eric Morse].

“The Ram, who is rich with an abundance of fleecy wool and, when shorn of this, with a fresh supply, will ever cherish hopes; he will rise from the sudden shipwreck of his affairs to abundant wealth only to meet with a fall, and his desires will lead him to disaster; he will yield his produce for the common benefit, the fleece which by a thousand crafts gives birth to different forms of gain, now workers pile into heaps the undressed wool, now card it, now draw it into a tenuous thread, now weave the threads to form webs, and now they buy and sell for gain garments of every kind; no nation could dispense with these, even without indulgence in luxury. So important is this work that Pallas herself has claimed it for her own hands, of which she has judged it worthy, and deems her victory over Arachne a token of her greatness. These are the callings and allied crafts that the Ram will decree for those born under his sign: in an anxious breast he will fashion a diffident heart that ever yearns to commend itself by its own praise.

“When the Ram emerges above the surface of the waves (rising) and the curve of his neck appears before his horns, he will give birth to hearts that are never content with what is theirs; he will engender minds bent on plunder and will banish all sense of shame: such is their desire for venture. Even thus does the ram himself rush forth with lowered horns, resolved to win or die. Not for them the gentle ease of a fixed abode with none but peaceful cares; it is ever their delight to travel through unknown cities, to explore uncharted seas, and enjoy the whole world’s hospitality. The Ram himself gives you evidence of this: once furrowing a trail through the glassy sea, he tinged it with the gold of his fleece, when on his back he carried Phrixus, bereft of his sister (Helle) by fate’s decree, and brought him to the banks of the Phasis and to Colchis”. [Astronomica, Manilius, 1st century AD, book 4, p.233].

The astrological influences of the star Sheratan

Of the nature of Mars and Saturn. It causes bodily injuries, unscrupulous defeat, destruction by fire, war or earthquake. [Robson, p.208.]

Daredevils and bold, danger is indicated when acting impulsively and in a foolhardy way. [Fixed Stars and Their Interpretation, Elsbeth Ebertin, 1928, p.18, under the name El-Scheratain.]