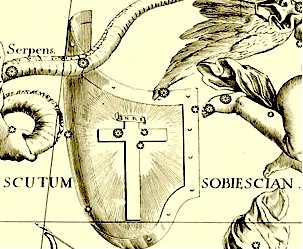 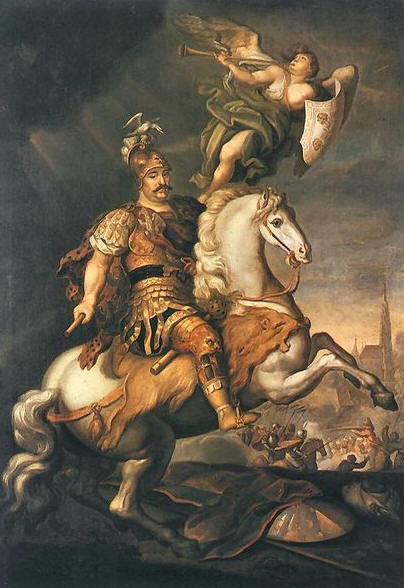 Jan Sobieski leading the Hussars at the Battle of Vienna [

Scutum is the only constellation that owes its name to a non-classical historical figure. It was created by Johannes Hevelius in 1684. Later, the name was shortened to Scutum [].

The constellation, Scutum Sobiescianum, Sobieski’s Shield, commemorates Sobieski, a king of Poland, who was a brilliant military leader celebrated throughout Europe for his role in repelling the Ottomans from the gates of Vienna in 1683. Pope Innocent XI called for Europe to unite in a Crusade against the Sultan Grand Vizier, Kara Mustafa [], who along with his 140,000 troops had surrounded Vienna, laying siege to the city. The Turks, after overrunning Serbia, Croatia, Romania, Bulgaria and Hungary, believed that if they could ‘crack’ Vienna, the rest of Europe would easily fall into their hands.

“The combined army of Sobieski moved forward in column … advanced into line and into the sunlight. Dazzling bright sunlight reflected off thousands of pieces of metal and jeweled accoutrements [the shields], and then Sobieski himself with his personal banner advanced to the front of his army… The Turks were thunderstruck!” (Polish Manuscripts, from Internet Modern History Sourcebook). 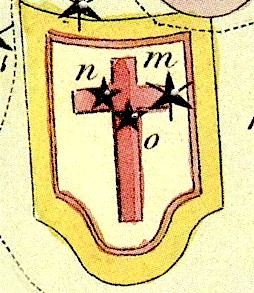 Sobieski won victory after victory with a much smaller force of 30,000 Polish-Lithuanian, and 11,000 Austrian and Prussian troops, they broke the siege of Vienna, and evicted the Ottomans. The battle marked the turning point in the 300-year struggle between the forces of the Central European kingdoms, and the Ottoman Empire. Seven years later, Hevelius commemorated these events with the inclusion of Scutum Sobiescianum in the heavens. The cross on the shield should represent this crusade, and the constellation serves as a memorial to a victory that defended Christian Europe from was believed to be an inevitable Islamic take-over.

Scutum, Sobieski’s Shield, is the name of this constellation. The word ‘shield’ is a generic term covering all defensive weapons. The scutum is one particular type of shield and the main type of shield used by the Roman army.

The word Scutum comes from the Indo-European root *skei ‘To cut, split’. Derivatives: shin¹, shinbone (< ‘piece cut off’), chine (from Old French eschine, backbone, piece of meat with part of the backbone), science, conscience, consciousness, conscious, nice (from Latin nescire, ‘not to know’), conscientious (from Latin scire, to know < ‘to separate one thing from another,’ discern), shit (the sense here is of ‘separating’ excrement from the body), schism, schist, schizo-, (these words from Greek skhizein, to split), scission, exscind, prescind, rescind, (these words from Latin scindere, to split), shed¹ (‘give off, drop’ shed tears, blood, or skin), sheath (< ‘split stick’), ski (snow or water skis, from Old Norse skidh), ecu, escudo (type of coins), escutcheon (a shield), esquire (from Latin scutarius, ‘shield-bearer’), scutum, squire, (these words from Latin scutum, shield < ‘board’), shiver², scute (plates or scales on the shell of a turtle or the underside of a snake), scutellate (covered with shieldlike bony plates or scales), scutage (shield money). [Pokorny skei- 919. Watkins

The Romans used their shields to create a tortoise-like formation called a testudo in which entire groups of soldiers would be enclosed in an armored box to provide protection against missiles. The Latin word testudo (Testudo was a name for adjacent Lyra) is given to the ancient Roman protective shelter formed by soldiers with shields overlapping above their heads when attacking a fort. Scutum is related to the word scute; scutes are plates or scales on the shell of a turtle or the underside of a snake.

The root of scutum is related to the word sky (according to Klein and others). There is a relationship in mythology with the sky and shields. Varro says that Ennius called the heavens the caeli clipeus, “theshield of the sky“. (According to Allen in Star Names, Scutum was known as ClypeusSobieskii, more correctly written Clipeus).

“Agamemnon says, ‘In the shield of the sky, that soundeth on high, for a shield is a hollow thing…'”. [Varro: On The Latin Language, p.331.]

Our word ‘sky‘ is seen etymologically in terms of cloud, from an old Norse word for cloud sky, and Old Saxon skio, ‘cloud’. The English language seems to be unique in this substitution of cloud for the heavens, perhaps the notion being that clouds shield the earth from too much solar radiation and insulate the Earth from losing valuable heat into space. A well-polished shield was seen to have the reflective properties of a mirror, as the sky is reflected in the sea. The word sky is related to Gothic skuggwa ‘mirror’. These meanings suggest a daylight sky in which clouds create shadows and reflections can be seen in water. The common Latin term for sky was caelus from Caelum (another constellation) from which we get our word ‘celestial’.

The word consciousness, the state or condition of being conscious, comes from the same root as Scutum, from the Latin verb scire, ‘to know’ or ‘to be conscious of’. “Buddhists call the state of consciousness ‘mirror-like awareness’: The self is completely transparent to itself, can see and be itself fully, just like looking in the mirror” []. Perseus, who carries the Gorgon Medusa’s severed head, was not able to look at the dreaded Medusa directly where to gaze upon the monster was to be turned to stone — but he was able to see her form reflected in a shield of polished bronze, thereby avoiding her gaze []. Perseus later gave Medusa’s severed head to Athena, who placed it in the center of her shield, the Aegis; the boss or umba is the middle part of a shield. A polished shield will also reflect the opponent’s image back to himself.

Scenes were depicted on shields. The Shield of Achilles in the Iliad, had a number of scenes from mythology, engraved in intricate detail, as did Hesiod’s Shield of Hercules

Scutum Sobiescianum, Sobieski’s Shield, the French Ecu, or Bouchiere, deSobieski, the Italian ScudodiSobieski, and the German SobieskischerSchild, was formed by Hevelius from the seven unfigured 4th-magnitude stars in the Milky Way west of the feet of Antinous, between the tail of the Serpent (Serpens) and the head of Sagittarius. The title is often seen as ScutumSobieskii or Sobiesii, sometimes as ClypeusSobieskii, more correctly written Clipeus; but our astronomers follow Flamsteed in his plain Scutum

It is pictured as the Coat of Arms of the third John Sobieski, king of Poland, who so distinguished himself in the defensive wars of his native land, as well as in his successful resistance of the Turks in their march on Vienna when turned back at the Kalenberg on the 12th of September, 1683. It was just after this, when he had made his triumphal entry into the city, that at the cathedral service of thanksgiving the officiating priest read the passage:

There was a man sent from God, whose name was John.

Seven years subsequently this new constellation was named for him by Hewel, with a glowing tribute to his merit and heroic deeds; the sign of the Cross for which he fought being emblazoned on his Shield as we have it to-day. Some identify this Cross, however, with that of the fighting Franciscan friar, Saint John Capistrano, famous at Belgrade in 1456, and now honored by a colossal statue on the exterior of the Vienna cathedral. The four stars on the border of the Shield are for the four sons of the king.

Although Scutum is a recent creation with us, it has long been known in China as TienPien, the Heavenly Casque, but in this are included some components of Antinous.

It comes to the meridian about the 10th of August.

It has no named star, — indeed the figure itself does not appear upon some modern maps, — and is chiefly noticeable from the peculiar brightness of the surrounding Galaxy; for within its boundaries, in five square degrees of space, Sir William Herschel estimated that there are 331,000 stars; and it is very rich in nebulae. Of these the notable cluster N. G. C. 6705,11 M., discovered by Kirch in 1681 and likened by Smyth to a flight of wild ducks, lies on the dexter chief of the Shield. This is just visible to the naked eye, and Sir John Herschel called it “a glorious object.”

Just below the constellation is the celebrated Horseshoe, or, Nebula, N. G. C. 6618, 17 M., one of the most interesting in the heavens, although {Page 374} in small glasses it bears more resemblance to a swan seen on the water, whence comes another title, the Swan Nebula.