The history of the star: Schedir

from p.145 of Star Names, Richard Hinckley Allen, 1889.
[A scanned copy can be viewed on this webpage 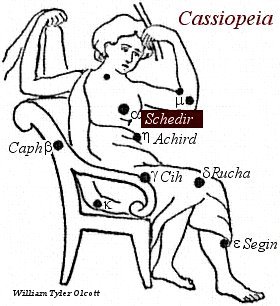 Alpha (α) Cassiopeia, Schedir, is a multiple and slightly variable star, 2.2 to 2.8, pale rose, on the left breast of the Ethiopian Queen.

Schedar is first found in the Alfonsine Tables, and was Schedir with Hevelius; Shadar, Schedar, Shedar, Sheder, Seder, Shedis, Zedaron, etc., elsewhere; and all supposed to be from Arabic Al Sadr, the Breast, which the star marks in the figure (of Cassiopeia). Some, however, have asserted that they are from the Persian Shuter for the constellation (Cassiopeia).

The 15th century Tartar astronomer Ulug Beg called it Al Dhat al Kursiyy from the whole constellation [the Arabians called CassiopeiaAlDhatalKursiyy, the Lady in the Chair], which the Italian astronomer Riccioli (1598–1671) changed to Dath Elkarti

"From Cassiope come the enhancement of beauty and devices for adorning the body: from gold has been sought the means to give grace to the appearance; precious stones have been spread over head, neck, and hands and golden chains have shone on snow-white feet. What products would a grand lady like Cassiope prefer her sons to handle rather than those she could turn to her own employments? And that material for such employment should not be lacking, she bids men look for gold beneath the ground, uproot all which nature stealthily conceals, and turn earth upside down in search of gain; she bids them detect the treasure in lumps of ore and finally, for all its reluctance, expose it to a sky it has never seen. The son of Cassiope will also count greedily the yellow sands, and drench a dripping beach with a new flood; he will make small weights to measure the tiny grains, or else will collect the wealth of gold-foaming Pactolus [Pactolus]; or he will smelt lumps of silver, separating the hidden metal and causing the mineral to flow forth in a running stream; otherwise he will become a trader of the metals produced by these two craftsmen, ever ready to change coinage of the one metal into wares of the other. Such are the inclinations which Cassiope will fashion in those born under her" [Astronomica, Manilius, 1st century AD, p.343.]

The astrological influences of the star Schedir

Incorporates serious demeanor with joi-se-vivre. This star is not considered unlucky, but a certain amount of demonic power seems to be ascribed to it. Should good living transgress reasonable limits the results will be disadvantageous. [Fixed Stars and Their Interpretation, Elsbeth Ebertin, 1928, p.20.]