The history of the star: Sarin 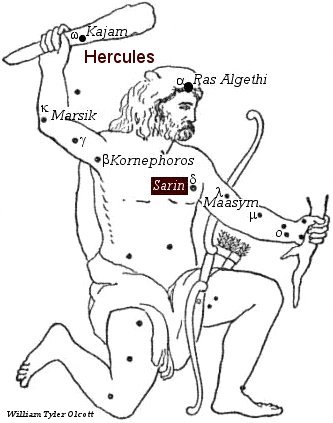 Delta (δ) Hercules, Sarin, is a star on the left side of the chest of the Kneeling Man.

Influences: According to Ptolemy it is like Mercury. It is said to give strength of character, tenacity and fixity of purpose, an ardent nature and dangerous passions. By the Kabalists it is associated with the Hebrew letter Daleth and the fourth Tarot Trump "The Emperor". [Robson, p.47.]

Hercules, the figure on bended knee and called by the Greek name of Engonasin, about whose origin no certainty prevails. Of this constellation is begotten the desertion, craftiness, and deceit characteristic of its children, and from it comes the thug who terrorizes the heart of the city. If perchance his mind is moved to consider a profession, Engonasin [a Greek title for constellation Hercules meaning Kneeler] will inspire him with enthusiasm for risky callings, with danger the price, for which he will sell his talents: daring narrow steps on a path without thickness, he will plant firm feet on a horizontal tightrope; then, as he attempts an upward route to heaven, (on a sloping tightrope) he will all but lose his footing and, suspended in mid-air, he will keep a multitude in suspense upon himself" [Manilius, Astronomica, 1st century, AD, p.353.]

The astrological influences of the star Sarin

In mundane astrology the star names can also be significant. On March 20, 1995 there was a sarin attack on the Tokyo subway, killing at least a dozen people, severely injuring fifty and causing temporary vision problems for nearly a thousand others. Transiting Jupiter was conjunct this fixed star Sarin