The history of the star: Sargas

from p.369 of Star Names, Richard Hinckley Allen, 1889.
[A scanned copy can be viewed on this webpage 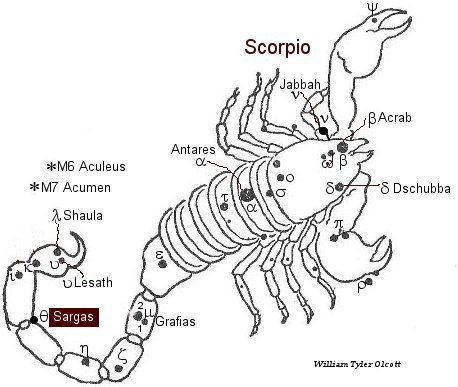 Theta (θ) Scorpius, Sargas, a 2nd-magnitude red star in the tail of the Scorpion.

It was the Euphratean Sargas, lying in the Milky Way just south of lambda (λ Shaula) and upsilon (υ Lesath), with which it formed one of the seven pairs of Twin Stars; as such it was Ma-a-su. And it may have been, with iota (ι), kappa (κ), lambda (λ Shaula) and upsilon (υ Lesath), the Girtab of the lunar zodiac of that valley, the Vanant of Persia and Vanand of Sogdiana (an Iranian people), all meaning the “Seizer,” “Smiter,” or “Stinger”; but the Persian and Sogdian words generally are used for our Regulus. In Khorasmia these stars were Khachman, the Curved.