The history of the star: Rucha

from p.148 of Star Names, Richard Hinckley Allen, 1889.
[A scanned copy can be viewed on this webpage 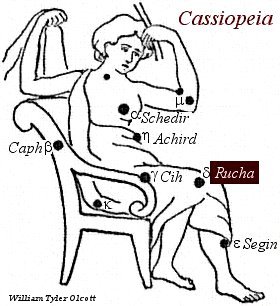 Delta (δ) Cassiopeia, Rucha, is a star on the knee of the Ethiopian Queen.

Rucha is the modern name for δ, but it had the Arabic titles: Ruchbah, sometimes Rucba and Rucbar, from Al Rukbah, the Knee.

It was utilized by Picard in France, in 1669, in determining latitudes during his measure of an arc of the meridian,— the first use of the telescope for geodetic purposes.