The history of the star: Pherkad 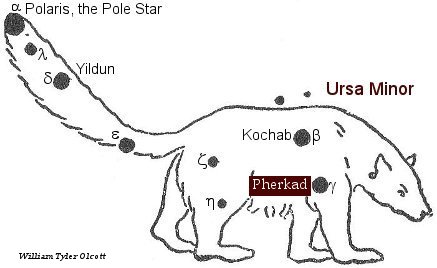 These were known by the Arabs as one star, Ahfa’ al Farkadain, the Dim One of the Two Calves, but by us as Pherkad Major and Pherkad Minor, 57 minutes of arc apart.

“of the Spanish word guardare, which is to beholde, because they are diligently to be looked unto, in regard of the singular use which they have in navigation;”

“many do call the Shafte, and others do name the Guardas after the Spanish tonge.”

While Eden, in the Arte of Navigation which he “Englished out of the Spanyshe,” in 1561, from Martin Cortes’ communication to King Charles V, mentioned “two starres called the Guardians, or the Mouth of the Horne“; and still earlier, in his translation of Peter Martyr, “the Guardens of the north pole.” Shakespeare, in Othello, wrote:

“The wind-shak’d surge, with high and monstrous mane

Seems to cast water on the burning Bear,

And quench the guards of th’ ever fixed pole.”

The Italian astronomer Riccioli’s (1598–1671) title for them is Vigiles, to which he added

These Guards, like the stars in Charles’ Wain (an asterism in Ursa Major), were a timepiece to the {p.460} common people, and even thought worthy of special treatises by navigators, as to their use in indicating the hours of the night.

The astrological influences of the constellation Ursa Minor

Legend: According to some accounts this constellation, Ursa Minor, represents Arcas, son of Callisto and Jupiter (see Bootes and Ursa Major). Other writers state that it is meant to represent Cynosura, one of the Nymphs of Crete who reared the infant Jupiter; the other, Helice, being Ursa Major. [Robson, p.65-66.]

Influences: According to Ptolemy the bright stars are like Saturn and in some degree like Venus. It is said to give indifference and improvidence of spirit, and to lead to many troubles. By the Kabalists it is associated with the Hebrew letter Tau and the 21st Tarot Trump “The Universe.” [Robson, p.66.]

The astrological influences of the constellation Ursa Minor given by Manilius:

“Now where heaven reaches its culmination in the shining Bears (Ursa Major and Ursa Minor), which from the summit of the sky look down on all the stars and know no setting and, shifting their opposed stations about the same high point, set sky and stars in rotation, from there an insubstantial axis runs down through the wintry air and controls the universe, keeping it pivoted at opposite poles: it forms the middle about which the starry sphere revolves and wheels its heavenly flight, but is itself without motion and, drawn straight through the empty spaces of the great sky to the two Bears and through the very globe of the Earth, stands fixed, since the entire atmosphere ever revolves in a circle, and every part of the whole rotates to the place from which it once began, that which is in the middle, about which all moves, so insubstantial that it cannot turn round upon itself or even submit to motion or spin in circular fashion, this men have called the axis, since, motionless itself, it yet sees everything spinning about it.

“The top of the axis is occupied by constellations well known to hapless mariners, guiding them over the measureless deep in their search for gain. Helice (Ursa Major), the greater, describes the greater arc; it is marked by seven stars which vie with each other under its guidance the ships of Greece set sail to cross the seas.

Cynosura (Ursa Minor) is small and wheels round in a narrow circle, less in brightness as it is in size, but in the judgment of the Tyrians it excels the larger bear.

“Carthaginians count it the surer-guide when at sea they make for unseen shores. They are not set face to face: each with its muzzle points at the other’s tail and follows one that follows it. Sprawling between them and embracing each the Dragon (Draco) separates and surrounds them with its glowing stars lest they ever meet or leave their stations.” [Astronomica, Manilius, 1st century AD, p.27].