The history of the star: Nusakan

from p.179 of Star Names, Richard Hinckley Allen, 1889.
[A scanned copy can be viewed on this webpage 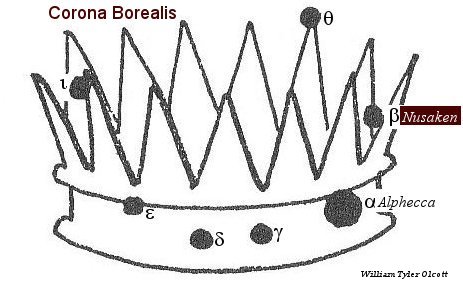 Beta (β) Corona Borealis, Nusakan, is a 4th-magnitude star in the Northern Crown.

Nusakan in the 2nd edition of the Palermo Catalogue, derived from the Masakin of the constellation. The Arabic spelling for Nusakan is An-Nasaqan (), "The two series" derived from Masakin; i.e. KasatalMasakin, "the Pauper’s Bowl", an Arabic name for the constellation of the Northern Crown Corona Borealis. [Al-Masakin seems to mean "the poor" in Arabic, also Masakin is a town in Tunisia.]

The astrological influences of the constellation Corona Borealis

Legend: Corona Borealis represents the garland given by Venus to Ariadne on the occasion of her marriage to Bacchus after she had been forsaken by Theseus. [Robson, p.40.]

Influences: According to Ptolemy it is like Venus and Mercury. It is said to give artistic ability, love of flowers, lassitude and disillusionment, but to bring its natives to a position of command. By the Kabalists it is associated with the Hebrew letter Daleth and the 4th Tarot Trump, "The Emperor". [Robson, p.40.]

The constellation is correlative with that which concerns the air and especially the weather and its effects on agriculture. It is generally a beneficial constellation. When in mutatine subsolar aspect the native will be fond of pleasure. When in matutine culmination, however, the native may prefer pleasure to the honors of life. If matutine setting, the constellation presages a propensity for pleasure that may even bring about disease, dishonor and imprisonment. [Fixed Stars and Judicial Astrology, George Noonan, 1990, p.10.]

The astrological influences of the constellation Corona Borealis given by Manilius:

"Corona the Crown’s lustrous ring, which twinkles with varying luminosity; for the circle is dominated by a single star [Alphecca], which with passing splendor sparkles in the mid forehead and enhances with its blazing flame the bright lights of the constellation. They shine as the memorial of deserted Ariadne" [Manilius, Astronomica, 1st century AD, book 5, p.29].

"Next to rise is Erigone [Virgo]. When you behold her ascending with five degrees wrested from the sea, there will emerge from the waves the bright memorial of what was once [in her lifetime] Ariadne’s crown: and gentle will be the skills herefrom bestowed. For here shines a maiden’s gifts. The child of the Crown will cultivate a garden budding with bright flowers and slopes. Grey with olive (trees) or green with grass. He will plant pale violets, purple hyacinths, lilies, poppies which vie with bright Tyrian dyes, and the rose which blooms with the redness of blood, and will stipple meadows with designs of natural color. Or he will entwine different flowers and arrange them in garlands; he will wreathe the constellation under which he was born, and like Ariadne’s crown will be the crowns he fashions; and stems he will squeeze together, and distil mixtures (make perfume) therefrom, and will flavor Arabian with Syrian scents and produce unguents which give off a mingled fragrance, that the charm of the perfume be enhanced by the blending. His heart is set upon elegance, fashion, and the art of adornment, upon gracious living and the pleasure of the hour. Such is the endowment prescribed by the years of the Maid and the flowers of the Crown". [Manilius, Astronomica, 1st century AD, book 5, p.321.]