The history of the star: Nodus 11

from p.209 of Star Names, Richard Hinckley Allen, 1889.
[A scanned copy can be viewed on this webpage 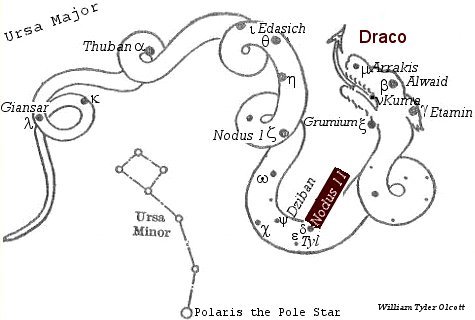 Delta (δ) Draco, Nodus 11, Nodus secundus of several catalogues, is a deep yellow star marking the 2nd of the four Knots, or convolutions, in the figure of the Dragon.

Al Tizini (Arabian astronomer, first half of 16th century) called it Al Tais, the Goat, as the prominent one of the quadrangle, delta (δ this star Nodus 11), pi (π), rho (ρ), and epsilon (ε Tyl), which bore this title at a late period in Arabic indigenous astronomy; although that people generally gave animal names only to single stars. The Jais, which is found in various lists, maps, and globes, would seem to be a typographical error, or an erroneous transliteration of the original Arabic. Delta (δ this star Nodus 11) also may have been one of Firuzabadi’s two undetermined stars Al Tayyasan, the Two Goatherds.