The history of the star: Mufrid

from p.104 of Star Names, Richard Hinckley Allen, 1889.
[A scanned copy can be viewed on this webpage 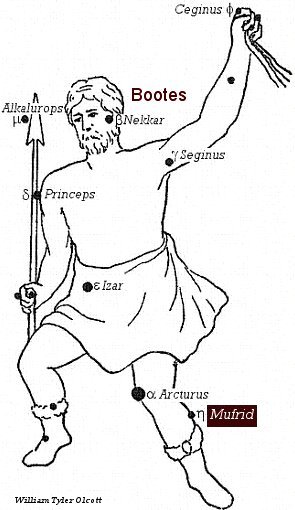 Eta (η) Bootes, Mufrid, is a pale yellow star on the left leg of the Herdsman.

Muphrid, Mufrid, and Mufride, of the Palermo and other catalogues, is from the 15th century Tartar astronomer Ulug Beg’s Al Mufrid al Ramih, the Solitary Star of the Lancer, and inexplicable unless on the supposition that it formerly was regarded as outside of the figure lines. the 13th century Persian astronomical writer Al Kazwini called it Al Rumh; and Al Tizini (Arabian astronomer, first half of 16th century), with Al Nasr al Din, more definitely, Al Rumh al Ramih, the Lance of the Lance-bearer, although inappropriately, for they designated its position as on Al Sak, the Shin-bone, and it thus appears as Saak in some lists; but as the figure is now drawn the star eta (η) lies above the left knee.

{p.105} With upsilon (υ) and tau (τ) in the feet of Bootes, it was Yew She Ti in China, the Officer standing on the right hand of the emperor.