The unicorn (Latin unus ‘one’ and cornus ‘horn’) is a mythical beast depicted with the body of a horse and a spiral horn on its forehead. The unicorn’s horn was said to have the property of being able to neutralize poisons. The picture of a Unicorn was the apothecaries’ symbol. The powdered root of the ‘unicorn horn’ was believed to be a panacea for just about all illnesses.

Ancient Greek writers associated the unicorn with the Hippoi Monokerata, One Horned Asses, in which it is said “the fabulous unicorn of Medieval bestiaries was derived from this creature of Greek legend.”

The only likely extant earthly representation of this mythical beast is believed to be the rhinoceros (the narwhal is the sea representation, see below). The rhinoceros is the only known land animal to possess a single horn and this horn is also credited with great healing properties. Powdered rhinoceros horns are regarded as a panacea in Eastern Asia, “effective against anything from nosebleeds and headaches to diphtheria and food poisoning” etc. The Asian rhino is Rhinocerosunicornis. In legend the unicorn is depicted with the body of a horse and a spiral horn on its forehead; the closest living relative to rhinoceros is the horse. Rhinoceros means literally ‘nose-horn.’ This feature is emphasized in the animal where the nasal passages is actually larger than the brain. Unlike the horns of other horned mammals which are bony, the rhino’s horn consists of keratin; densely compacted hair (the words ‘keratin’ and ‘horn’ come from I.E. *ker- ‘Horn, head’).

Amalthea was the she-goat that nourished the baby Jupiter, hence its horn became proverbially used for nourishment and abundance. This modern constellation, Monoceros, is a likely a representation of the ‘horn of plenty‘, the Cornucopia (cornu-copiae), that Zeus broke off his goat-nanny nurse, Amalthea, while playing with her as a baby; Amalthea, herself, was placed amongst the stars as Capra, the star Capella on the arm of the Constellation Auriga, the Charioteer. The position of the horn is not known. The writer of this webpage suggests that it might relate to this constellation, he says “… the sacred goat having broken off one of her horns, Amaltheia filled it with flowers and fruits and presented it to Zeus, who placed it together with the goat amongst the stars, although the one-horned goat was not identified with the Unicorn by the Greeks. …”. Ovid relates; “When he controlled the sky and sat on his father’s throne … Jove (Jupiter, Zeus), he made stars of the nurse and the nurse’s fruitful horn, which bears even now its mistress’ name.” [Ovid, Fasti 5.111

Confirming the widely held belief that the unicorn was thought to be the same as the rhinoceros, Isidore says:

“The rhinoceros (rhinoceron) is named with a Greek word; in Latin it means ‘horn on the nose‘. This is also the monoceron, that is, the unicorn (unicornus), because it has a single four-foot horn in the middle of its forehead, so sharp and strong that it tosses in the air or impales whatever it attacks. It often fights with the elephant and throws it to the ground after wounding it in the belly. It has such strength that it can be captured by no hunter’s ability, but, as those who have written about the natures of animals claim, if a virgin girl is set before a unicorn, as the beast approaches, she may open her lap and it will lay its head there with all ferocity put aside, and thus lulled and disarmed it may be captured.” [The Etymologies of Isidore of Seville, 6th century A.D., p.252.].

In British slang the word ‘rhino‘ means ‘money’ and may have something to do with the origin of the expression “paying through the nose.”

Rhinoceros are solitary creatures, both male and female rhinos establish territories. The bestiaries saw this animal as a symbol of the pious recluse who has renounced the world because it loves to dwell alone and remote from its kind [].

This webpage gives an opinion on the original nature of the virgin-capture story.

There is a Christian story associated with the neutralizing of poisons that parallels the unicorn’s and rhinoceros’ horn’s detoxifying attributes: St. Benedict, 547 A.D., is called ‘father of Western Monasticism‘ (from mono-, root *men- above). A group of monks asked him to join them. Later, resisting his strict rules, they tried to poison him. St. Benedict is represented by a cup, sometimes cracked, because it is said “he blessed the cup of poison and rendered it harmless” [].

Monad, according to the Pythagoreans, was a term for God or the first being, or the totality of all beings. Monad being the source or the One meaning without division. Monotheism is the belief in the existence of one deity or God, or in the oneness of God. 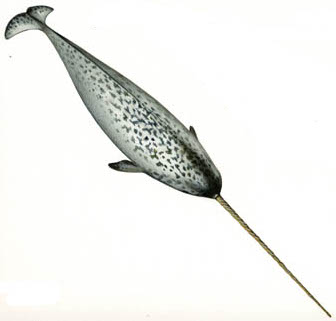 The narwhal‘s three meter (9 foot) long tooth was passed off as the horn of a unicorn, or alicorn. The depiction of the constellation by Hevelius in 1690 (below, under the tables, and in 1825 Urania’s Mirror above) shows a unicorn with a spiral narwhal’s horn. The narwhal’s (Monodonmonoceros meaning ‘one-tooth, one-horn’) long ‘spiral horn’ is actually a long tooth or tusk. Narwhal, from Old Norse nar, corpse (from its whitish grey color) + hvalr, whale, was believed to be able to cure many illnesses and neutralize poison. Unicorn’s horn was sold in druggist’s shops in powdered form, and whole horns were kept in the vaults of royalty, worth many times its weight in gold []. The fact that narwhals are seldom seen south of Greenland explains the success of Scandinavian fishermen in keeping their lucrative secret for at least five centuries [].

The Unicorn in this constellation is usually depicted with a spiralled narwhal’s horn. In the constellation Monoceros, near the nose of the unicorn, or the base of the unicorn’s horn, is a feature called the Rosette Nebula. The narwhale is from Old Norse nahvatr, Old Norse from nar ‘corpse’, A lesser known interpretation comes from the Old Norse, nafarr, referring to the ‘corkscrew’ which describes the spiralled tusk.

Associations with the process of dying and death:

“The belief that the narwhal is a cause of human death, or an omen or symbol associated with human death remains to this day in some quarters.” [Arctic Dreams]. The linguistic association with death; the word ‘narwhal‘ is an old Norwegian name that means ‘corpse-whale‘ or ‘death-whale,’ from Old Norse nahvatr, from nar, ‘corpse’, related to Old English ne, neo, Gothic naus, ‘corpse’, + hvalr, ‘whale’.

There are a few reasons narwhals were known as corpse whales; they often swim belly up, and their propensity to lie on the surface in the summer (called ‘logging’) gave that impression. The pallid color of the narwhal’s skin has been likened to that of a drowned human corpse; narwhals have whitish grey-mottled skin that Norwegians thought resembled a drowned sailor. The spots on the narwhal look like the patchy mottling of the skin that can happen to a human body after death. Narwhals often suffocate when the surface of the water closes up with ice. Some sounds they make sound to me like a dying person struggling to breathe [see videos on narwhal sounds].

There are associations with the river Styx here: “Aelian and his Scythian Ass which holds in its horn the water of the Styx” [http://gutenberg.net.au/ebooks03/0300611h.html] was an ancient Greek association with the unicorn.

Narcissus was a youth who was stupefied into numbness by his own beauty which he saw reflected in a pool. He died gazing at his own image, and was turned into a flower, a narcissus. It is said that Narcissus still keeps gazing on his image in the waters of the river Styx, in the Underworld. He was loved by the nymph Echo. The theme here being that he was wanted to be alone, and had no need for another.

Officina Typographica, or Atelier Typographique, the Printing Office (actually ‘typing office’), was a minor constellation situated between the feet of the Unicorn. The typo– element of this word is cognate with the word Styx, both these words from the Indo-European root *(s)teu- [Pokorny 1. (teu– 1032. Watkins