The history of the star: Mirfak

from p.331 of Star Names, Richard Hinckley Allen, 1889.
[A scanned copy can be viewed on this webpage 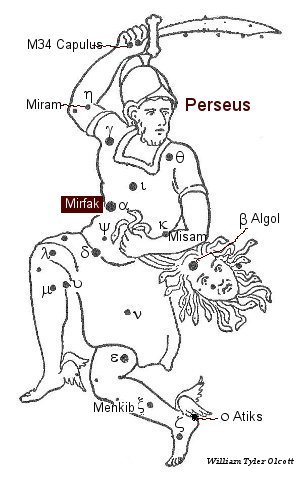 Alpha (α) Perseus, Mirfak, is a star on the right side of the Champion.

Algenib, with the early variations of Algeneb, Elgenab, Genib, Chenib, and Alchemb, is from Al Janb, the Side, its present position on the maps; the 14th century Greco-Persian astronomer Chrysococca, similarly called it (Greek) Pleura Persaous (Perseus’ side or rib).

Another name, Marfak or Mirfak, the Elbow, sometimes written Mirzac, comes from the Arabians’ Marfik al Thurayya, thus qualified as being next to the Pleiades (a group of stars in Taurus) to distinguish it from the other elbow. But this may indicate a different representation of Perseus in their day,— a suspicion stengthened by the nomenclature of others of his stars, especially of xi (ξ Menkib) and omicron (ο Atiks).

Assemani alluded to a title on the Borgian globe,—Mughammid, or Mu-hammir, al Thurayya, the Concealer of the Pleiades,—which, from its location, may be for this star.

With gamma (γ), delta (δ), and others it was the Chinese Tien Yuen, the Heavenly Enclosure.