The history of the star: Mira

Omicron (ο) Cetus, Mira (related to the words “miraculous”, and “ad-mire”, from Latin mirus, “wonderful”), is described as a deep garnet colored star located in the neck of the Whale or Sea-Monster. 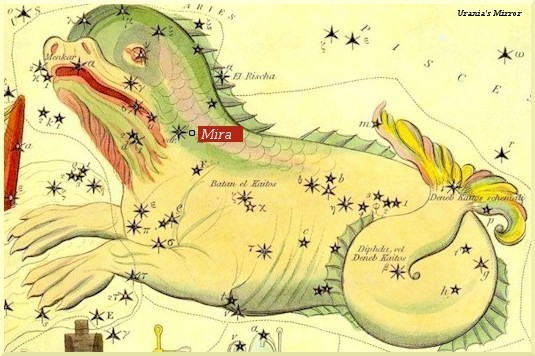 Mira has been called the constellation’s necklace. An eclipsing binary (two stars that periodically obscure each other and rapidly dim), subject to extreme irregularities. Mira is a long-period variable star with a cycle of about 331 days from one period of maximum brightness to the next. This period is sometimes a little erratic and can be off by as much as 30 days either way. For about five months Mira is invisible, then in the next six months it gradually increases in brilliance, until finally it shines with the beautiful sparkle of a star of the second magnitude. This peak of brilliance lasts for about a fortnight, after which time it again starts slowly to fade. At various times it has not been seen at all with the naked eye for several years consecutively, — and its maxima and minima are even more irregular. While it has been known almost to equal Aldebaran in its light, as it did under Herschel’s observations on the 6th of November, 1779, Chandler gives its maximum as from 1.7 to 5, and its minimum from 8 to 9.5. It thus sometimes sends out at its maximum fifteen hundredfold more light than at its minimum. [Various sources on the internet]

from p.164 of Star Names, Richard Hinckley Allen, 1889.
[A scanned copy can be viewed on this webpage

Mira, Stella Mira, and Collum Ceti are all titles for this Wonderful Star in the Whale’s neck, the show object in the heavens as a variable of long period and typical of its class.

The astrological influences of the star Mira

Its nature corresponds to Saturn and Jupiter. Connected well and with a well placed Saturn and linked up well otherwise, this will mean prudence, perseverance, versatility, a progressive spirit and endurance in solving difficult problems. This star in unhelpful connections, will bring as results failures, fiascoes, enmity, especially with Saturn transits and when linked with the Moon, melancholy will then appear. Linked with Mercury, it will mean a lessening of spiritual forces. In critical situations, suicide is indicated. [Fixed Stars and Their Interpretation, Elsbeth Ebertin, 1928, p.15.]