The history of the star: Metallah 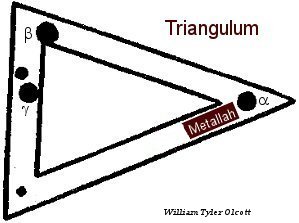 Alpha (α) Triangulum, Metallah, is a yellow star at the vertex of the Northern Triangle.

It is a half-magnitude inferior to beta (β), although the latter bears no name. Together these two were the Arabs’ Al Mizan, the Scale-beam, alpha comes to the meridian on the 6th of December.

The astrological influences of the constellation Triangulum

Legend: Triangulum is said to have been placed in the heavens by Jupiter at the request of Ceres who asked that the shape of her island Sicily might be represented amongst the stars. [Robson, p.64.]

Influences: According to Ptolemy it is like Mercury. It is said to give a just, companionable, truthful, righteous and benevolent nature, with interest in architecture and Freemasonry. [Robson, p.64.]

The astrological influences of the star Metallah

This star has the planetary nature of Mercury and indicates those of a just nature and those whose living is made in the legal profession. [Fixed Stars and Judicial Astrology, George Noonan, 1990, p.22-23.].