The history of the star: Menkent

from p.154 of Star Names, Richard Hinckley Allen, 1889.
[A scanned copy can be viewed on this webpage 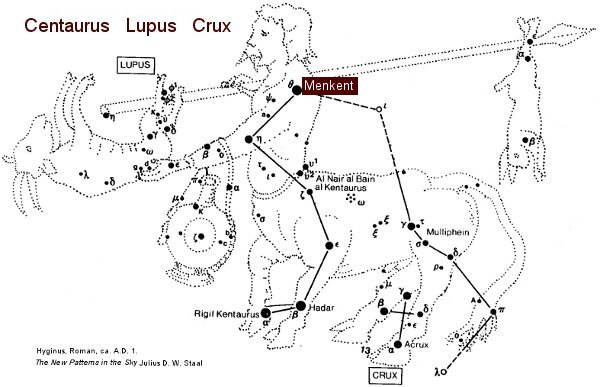 Theta (θ) Centaurus, Menkent, is the third biggest star in the constellation Centaurus, a double and variable, 2.2 to 2.7 and 14.3, red and bluish star in the left shoulder of the Centaur.

"The Centaur, from his own nature assigns qualities to his progeny. Such a one will either urge on asses with the goad and yoke together quadrupeds of mixed stock or will ride aloft in a chariot; else he will saddle horses with a fighter or drive them into the fight [translator’s note; he will load horses with arms or drive them into arms, that is yoked to war-chariots].

"Another knows how to apply the arts of healing to the limbs of animals [translator’s note; these endowments reflect the identification of Centaurus as Chiron] and to relieve the dumb creatures of the disorders they cannot describe for his hearing.

"His is indeed a calling of skill, not to wait for the cries of pain, but recognize betimes a sick body not yet conscious of its sickness". [Astronomica, Manilius, 1st century A.D, book 5, p.329].