The history of the star: Manubrium 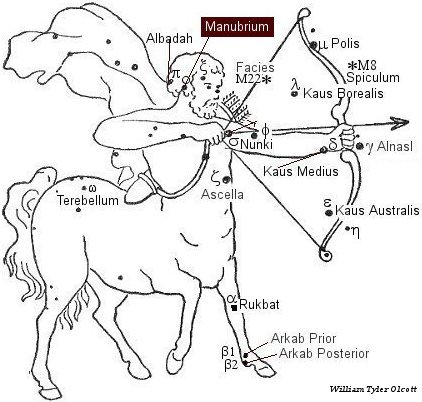 Omicron (ο) Sagittarius, Manubrium, called "the Handle", is one of the cluster of stars in the Archer’s face.

A Manubrium is a handle-shaped anatomical part, for example the upper part of the sternum or part of the inner ear, from Latin manus ‘hand’, the star does appear to mark the Archer’s right ear.

The astrological influences of the star Manubrium

Part of the cluster in the Archer’s Face. Of the nature of the Sun and Mars. It causes blindness, explosions, fire, flaring heat, heroism, courage, and defiance. [Robson, p.173-174.]

The name Manubrium means a handle. Possibly this comes from some sketches of the Archer in which the hand holding the string of the bow is pulled right back to the position of this star. It is a Sun-Mars type, by Ptolemy and must thus be considered one of the `blind stars’. But the same planetary simile is of course symbolic of the fatal potency in the hand that may at any moment release the arrow into flight. To find a major planet in a chart very precisely on Manubrium rather than its neighbors (which are very close in longitude) is likely to show up the more aggressive connotations of the constellation and sign here, we should often find less of the philosopher than the high-performance athlete or the high court judge. The military strategist is also likely to have this star strong. [The Living Stars, Dr. Eric Morse, p.96-97.]