The history of the star: Maasym

from p.244 of Star Names, Richard Hinckley Allen, 1889.
[A scanned copy can be viewed on this webpage 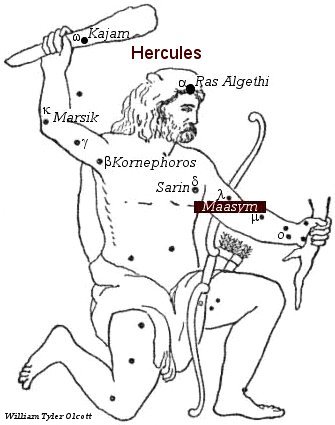 Lambda (λ) Hercules, Maasym, is a deep yellow star on the left arm of the Kneeling Man.

Masym, Maasym, Maasim, Mazym, Mazim, and Masini are from the Arabic Misam, the Wrist, although the second-century Greek astronomer Ptolemy as well as most of the stellar map-makers located omicron (ο) on that part of the figure; but the 17th century German astronomer Bayer, probably by an oversight, gave the title to lambda (λ Maasym), not far from the left shoulder, and hence the mistake which still survives. Burritt’s Atlas of 1856 applied Masym to this lettered {p.245} star at the elbow, and duplicated it at the one on the hand, omitting the letter; but this title had appeared in the Latin Almagest of 1515 and the Alfonsine Tables of 1521, not as a proper name, but simply indicative of the position of the star omicron (ο), which, though now unnamed, should bear that title instead of lambda (λ Maasym). The same word is used in those works to describe the positions of theta (θ) and eta (η Hoedus 11) Auriga in the similar location, but is there written Mahasim. The Century Cyclopedia, by a misprint for lambda (λ Maasym), uses Masym for chi (χ) Hercules in the left hand of the giant.

Lambda (λ Maasym) also was Chaou, one of the early feudal states of China.

The Sun flies forward to his brother Sun;

The dark Earth follows wheel’d in her ellipse. – Tennyson’s The Golden Year

Although Johann Tobias Mayer of Gottingen seems to have been the pioneer, in 1760, in the efforts to ascertain the direction of the sun’s motion among the stars, yet Sir William Herschel was the first successful investigator as to this, about 1806, and he settled upon the vicinity of lambda (λ Maasym) as the objective point of our solar system, the Apex of the Sun’s Way; and his determination was, in a great measure, confirmed by later astronomers.

Influences: According to Ptolemy it is like Mercury. It is said to give strength of character, tenacity and fixity of purpose, an ardent nature and dangerous passions. By the Kabalists it is associated with the Hebrew letter Daleth and the fourth Tarot Trump "The Emperor". [Robson, p.47.]

Hercules, the figure on bended knee and called by the Greek name of Engonasin, about whose origin no certainty prevails. Of this constellation is begotten the desertion, craftiness, and deceit characteristic of its children, and from it comes the thug who terrorizes the heart of the city. If perchance his mind is moved to consider a profession, Engonasin [a Greek title for constellation Hercules meaning Kneeler] will inspire him with enthusiasm for risky callings, with danger the price, for which he will sell his talents: daring narrow steps on a path without thickness, he will plant firm feet on a horizontal tightrope; then, as he attempts an upward route to heaven, (on a sloping tightrope) he will all but lose his footing and, suspended in mid-air, he will keep a multitude in suspense upon himself" [Manilius, Astronomica, 1st century, AD, p.353.]