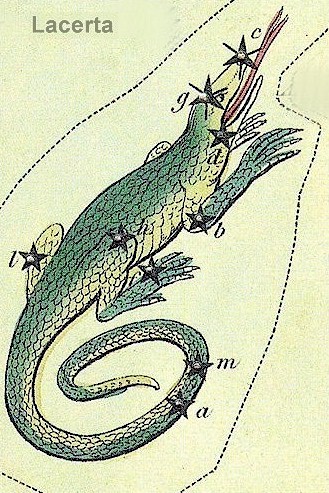 Lacerta is the name of a genus of lizards of family Lacertidae. Lacerta, is derived from Spanish lagarto, from Latin lacertus (masculine), re-spelled lacerta (feminine), ‘lizard’, which stand for lacer-tos, lacrotos, re-spelled *lacer-ta, *lacrota, and derive from Indo-European base leq, ‘to bend, twist’, whence probably also Latin locusta, ‘grasshopper, locust‘, literally ‘the jumper’, Old Norse leggr, ‘leg‘. Related words are: lizard, leg, Lacerta, lacertian, lobster, locust, and alligator [Klein]. Lizard is a nautical term used for a piece of rope with a thimble spliced into the end. Lizard is also a term used for a piece of timber with a forked end, used in dragging a heavy stone, a log, or the like, from a field.

Alligator is an alteration of Spanish ellagarto, ‘the lizard’: el, the (from Latin ille, that), + lagarto

Lizards differ from crocodiles in having a broader, shorter snout. Lizards (which include alligators, crocodiles and their ancestors) possess lachrymal glands, i.e. tear glands. The voice of crocodiles and alligators may be compared to broken sobs, or bellowing, which are sometimes mistaken for the cries of a child []. It is interesting that the name of the Egyptian crocodile god was Sobek. Alligators and crocodiles can spend prolonged periods of time out of the water and the eyes need to be protected from drying out by the development of tear glands. The variant spelling of  the word for lizard *lacer-, to *lacro, resembles the Latin cognate for tear (as in ‘crocodile tears’); lachrymal, also lacrimal, from Latin lacrima, from the Indo-European root *dakru– ‘Tear’. [Pokorny dakru- 179. Watkins].

The biceps tendon is controlled by the lacertus fibrosus. Lacertus was a Latin term for the upper arm, or a bundle or fascicle of muscular fibers. The Latin word was used for ‘muscle’ as well as ‘lizard,’ perhaps because the ripple of a muscle beneath the skin reminded people of a lizard’s movement (an exactly parallel development links mouse and muscle). [John Ayto, Dictionary of Word Origins

“The lizard (lacertus) is a type of reptile, so named because it has arms (compare lacertus, ‘upper arm’). There are many kinds of lizards, such as the botrax, the salamander, the saura, and the newt.” [p.257.] “In the arms is the brawn of the upper arms (lacertus), and there the marked strength of the muscles is located.” [p.235]  [The Etymologies of Isidore of Seville, 7th century AD]

“Some believe that the word for tears (lacrima) comes from an injury of the mind (laceratiomentis); others maintain that it is identical with what is called lakruon (‘tear’) in Greek.” [The Etymologies of Isidore of Seville, p.233.]

The word Lacertus resembles lacerate from Latin laceratus, from lacerare ‘tear to pieces, mangle,’ from lacer ‘torn, mangled’. Unlike snakes which shed their skin in one piece, lizards shed their skin in patches and can look very ragged for a few days – their skin is torn to pieces. Also lizards can be torn to pieces in another way; they can escape from their enemies by breaking off their tail, and are capable of regenerating lost limbs or tails. A detached tail wiggles for several minutes.

The shed skin of lizards might resemble pieces of lace? Some lizards have names like the Lace Monitor, Frilled neck Lizard … Lizard is a nautical term used for a piece of rope with a thimble spliced into the end. A shoelace is a piece of string with a tipped end, or aglets.

Lacerta, the Lizard, is adjacent to Cygnus, the Swan. This constellation might relate to the myth of Hyrie, mother of Cycnus (Cygnus). Hyrie (also Thyria, or Thyrie) turns into a lake weeping tears for her son. Hyrie was a woman (perhaps from Hyria in Boiotia, Central Greece) who bore Apollon a son Cycnus, who was transformed into a swan by Apollo when he leapt off a cliff. “Hyrie, not knowing he was safe, pined away with weeping, and became the lake that carries her name”. Lake Hyrie, and Cycnean Tempe are closeby. Referring to Medea flying over the earth Ovid says: “Then she saw Lake Hyrie, and Cycnean Tempe” [http://etext.virginia.edu/latin/ovid/trans/Metamorph7.htm] Swans are usually depicted swimming on lakes and prefer the still waters of lakes to flowing rivers. The word lake from Latin lacus, resembles some cognates of lacerta

Lacerta, the Lizard is the French Lezard, the Italian Lucertola, and the German Eidechse, — Bode’s Eideze, — extending from the head of Cepheus to the star pi at the left foot of Pegasus, its northern half lying in the Milky Way.

This inconspicuous constellation was formed by Hevelius from outlying stars between Cygnus and Andromeda, this special figure having been selected because there was not space for any of a different shape. But he drew “a strange weasel-built creature with a curly tail,” heading the procession of his offerings to Urania illustrated in his FirmamentumSobiescianum of 1687. Flamsteed’s picture is more like a greyhound, but equally uncouth; that by Heis is typically correct.

Its inventor gave it the alternative title of Stellio, the Stellion, a newt with star-like dorsal spots found along the Mediterranean coast. Somewhat coincidentally its stars, with those in the eastern portion of Cygnus, were combined by the early Chinese in their FlyingSerpent

Hevelius catalogued 10 components; Argelander, 31; and Heis, 48. They come to the meridian about the middle of April. It has no named star, and its lucida, alpha, is only of 3.9 magnitude.

Before the Lizard was formed, Royer introduced here, in 1679, the SceptreandtheHandofJustice commemorating his king, Louis XIV; and a century later Bode substituted the Frederici Honores, in honor of his sovereign Frederick the Great; but Lacerta has held its place, while Royer’s figure has been entirely forgotten, and Bode’s nearly so.