The history of the star: Kurdah

from p.159 of Star Names, Richard Hinckley Allen, 1889.
[A scanned copy can be viewed on this webpage 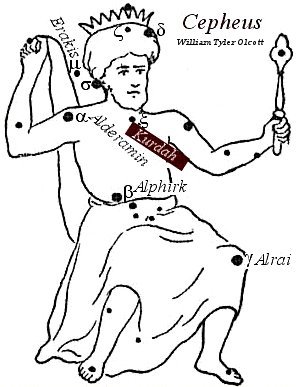 Xi (ξ) Cepheus, Kurdah, is a star located on the neck or chest of the upside-down figure of the Ethiopian King.

The 13th century Persian astronomical writer Al Kazwini called this Al Kurhah, an Arabic word that the German astronomer Ideler (1766-1846) translated as a white spot, or blaze, in the face of a horse; but thinking this not a proper stellar name, suggested Al Kirdah, the Ape.

"Cepheus will not engender dispositions inclined to sport. He fashions faces marked by a stern demeanor, and moulds a countenance whereon is depicted gravity of mind. Such men will live on worry and will incessantly recall the traditions of a bygone age and commend old Cato’s maxims [Cato the censor].