The history of the star: Kraz 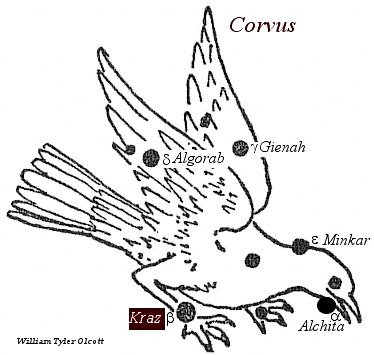 Beta (β) Corvus, Kraz, is a 3rd-magnitude ruddy yellow star in the right claw of the Raven.

In China it is Tso Hea, the Left-hand Linch-pin; but under this title were included gamma (γ Gienah), delta (δ Algorab), and eta (η).

No meaning is given for this name, but to me the word ‘kraz‘ seems be an Arabic version of Latin cras. The cawing of the ravens or crows was heard as ‘Cras! Cras!’ by Latin speakers, and was thought to mean "Tomorrow! Tomorrow!" We get the word procrastinate, ‘postpone until the morrow’, from Latin cras. Mythology identifies Corvus with the procrastinating raven Apollo sent to fetch water, and tells how he dallied at a fig tree until the figs became ripe before carrying out the god’s task.