The history of the star: Kochab 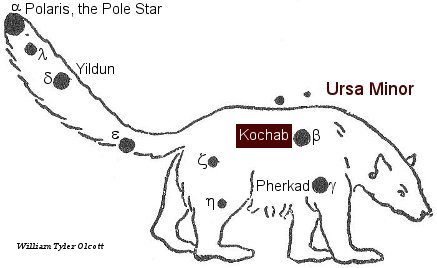 Beta (β) Ursa Minor, Kochab, is a reddish star at the right front hip of the Little Bear.

Kochab is from the Arabic title that it shared with alpha (α Polaris); and it perhaps was this star that the Greek astronomers called Polos, for it was near the pole 1000 years before our era. Burritt’s Atlas of 1856 has Kochah

Alrucaba, variously written, is also common to it and Polaris, as well as to its constellation, the English astronomer Smyth (1788-1865) saying that this was the AlfonsineReicchabba

{p.459} Na’ir al Farkadain and Anwar al Farkadain, the Bright One, and the Lights, of the Two Calves, were titles in the Desert for this star, from an early figure here, in the Fold, of these timid creatures keeping close to their mother. Beta (β Kochab) was often designated by pre-Islamitic poets as the faithful and, from its ever visible position, the constant companion of the night traveler. Indeed the Badawiyy claimed that they had a perpetual treaty with Al Farkad to this effect, and their poets made the Two Pherkads, beta (β Kochab) and gamma (γ Pherkad), symbols of constancy. English writer on globes John Chilmead (circa 1639) cited Alferkathan

In China beta (β Kochab) was another Ti, the Emperor.

The astrological influences of the constellation Ursa Minor

Legend: According to some accounts this constellation, Ursa Minor, represents Arcas, son of Callisto and Jupiter (see Bootes and Ursa Major). Other writers state that it is meant to represent Cynosura, one of the Nymphs of Crete who reared the infant Jupiter; the other, Helice, being Ursa Major. [Robson, p.65-66.]

Influences: According to Ptolemy the bright stars are like Saturn and in some degree like Venus. It is said to give indifference and improvidence of spirit, and to lead to many troubles. By the Kabalists it is associated with the Hebrew letter Tau and the 21st Tarot Trump “The Universe.” [Robson, p.66.]

The astrological influences of the constellation Ursa Minor given by Manilius:

“Now where heaven reaches its culmination in the shining Bears (Ursa Major and Ursa Minor), which from the summit of the sky look down on all the stars and know no setting and, shifting their opposed stations about the same high point, set sky and stars in rotation, from there an insubstantial axis runs down through the wintry air and controls the universe, keeping it pivoted at opposite poles: it forms the middle about which the starry sphere revolves and wheels its heavenly flight, but is itself without motion and, drawn straight through the empty spaces of the great sky to the two Bears and through the very globe of the Earth, stands fixed, since the entire atmosphere ever revolves in a circle, and every part of the whole rotates to the place from which it once began, that which is in the middle, about which all moves, so insubstantial that it cannot turn round upon itself or even submit to motion or spin in circular fashion, this men have called the axis, since, motionless itself, it yet sees everything spinning about it.

“The top of the axis is occupied by constellations well known to hapless mariners, guiding them over the measureless deep in their search for gain. Helice (Ursa Major), the greater, describes the greater arc; it is marked by seven stars which vie with each other under its guidance the ships of Greece set sail to cross the seas.

Cynosura (Ursa Minor) is small and wheels round in a narrow circle, less in brightness as it is in size, but in the judgment of the Tyrians it excels the larger bear.

“Carthaginians count it the surer-guide when at sea they make for unseen shores. They are not set face to face: each with its muzzle points at the other’s tail and follows one that follows it. Sprawling between them and embracing each the Dragon (Draco) separates and surrounds them with its glowing stars lest they ever meet or leave their stations.” [Astronomica, Manilius, 1st century AD, p.27].