The history of the star: Kelb Alrai

from p.301 of Star Names, Richard Hinckley Allen, 1889.
[A scanned copy can be viewed on this webpage 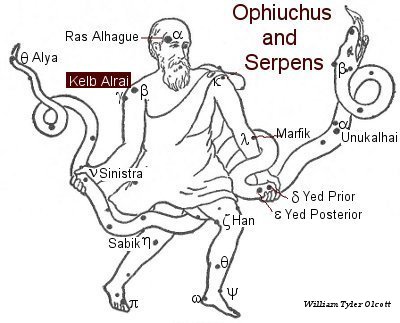 Beta (β) Ophiuchus, Kelb Alrai, is a yellow star in the right shoulder of the Snake charmer.

Cebalrai, Celbalrai, and Cheleb are from Kalb al Ra’i. "The Heart of the Shepherd," which Brown gives as the meaning of his Celabrai, is erroneous, doubtless from confusion of the Arabic Kalb, Heart, and Kalb, Dog.

The star is 9° southeast of alpha (α), and 5° west of Taurus Poniatovii, the Polish Bull, now included in Ophiuchus.