The history of the star: Izar

from p.104 of Star Names, Richard Hinckley Allen, 1889.
[A scanned copy can be viewed on this webpage 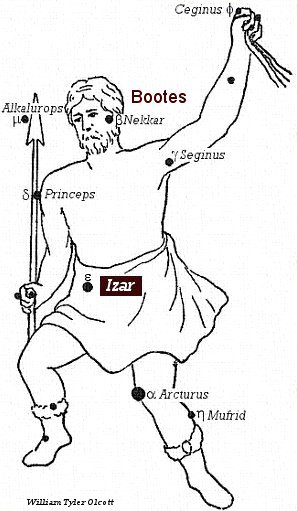 Epsilon (ε) Bootes, Izar, is a binary star, 3 and 6, pale orange and bluish green, lying on the loins of the Ploughman.

Izar bore these titles in Arabia: Al Mintakah al ‘Awwa‘, the Belt of the Shouter (Bootes had some titles meaning shouter); Izar, the Girdle; and Mi’zar, the Waist-cloth,— all references to its place in the figure. This last word was turned by early European astronomical writers into Micar, Mirar, Merer, Meirer, Mezen, Mezer, Merak, and Mirak, similar to the title of beta (β) Andromeda (Mirach), and all appropriate. The analogous Perizoma was used for it in the Alfonsine Tables

Why it was so favored in nomenclature is not known, for with us it is noticeable only from its exquisite beauty in the telescope, whence it is fast monopolizing the name Pulcherrima (“beautiful one” from Latin pulcher, “beautiful”), given to it by the elder Russian 19th century astronomer Struve.