This constellation, the Hydrus, is positioned near the South Pole, at the southern end of the river Eridanus. It represents the male Hydrus, from Greek hudros, a water-snake. There is another constellation representing the female Hydra, the Hydra of Lerna. The etymology for these two constellations are intertwined. Hydra and Hydrus come from the Indo-European root *wed-¹  ‘Water, wet’. Derivatives: water, wet, wash (a body of water), winter (the ‘wet season’), hydrant, hydro-, hydrous, utricle (a membranous sac contained within the labyrinth of the inner ear – involved in balance; also a small vestigial blind pouch of the prostate gland), dropsy, hydathode (water-excreting), hydatid, (these words from Greek hudor, water), undine (a being having water as its element), undulate (wave), abound, abundant, inundate, redound, redundant (‘overflows’ because there is too much of it), surround (from Latin unda, wave), otter (water animal), nutria (from Latin lutra, otter), Hydrus (from Greek hudros, a water snake), Hydra, hydrilla (diminutive of Latin hydra, a submersed plant; Hydrilla verticillata), hydrate (from Greek hudor, a water serpent), hydrocortisone (a steroid hormone to treat inflammatory conditions and adrenal failure), hydrogen (the lightest of all gases and the most abundant element in the universe), hydrochloricacid (HCl, used in petroleum production, it is found in the stomach in dilute form), hydrocephalus (abnormal accumulation of fluid in the cerebral ventricles), hydrops (old-fashioned name for heart failure, caused by a surfeit of water), hydrology, usquebaugh, whiskey, vodka. [Pokorny 9. aw(e)- 78. Watkins

This masculine Hydrus and the feminine Hydra are separate constellations. The etymology for these two constellations are intertwined. The word hydrogen could relate to either or both. Hydrogen is the most abundant element in the universe. Most of the Earth’s hydrogen is in the form of chemical compounds such as hydrocarbons and water. Hydrogen gas is produced by some bacteria and algae and is a natural component of flatus or flatulence.

Hydrus (Greek Hydros) might be the ocean, Oceanus, at the mouth of the Eridanus? This mythological webpage says Hydrus and Oceanus are the same: and says that Homer portrays Okeanos and Tethys as the primordial gods of creation. On this webpage Greek Mythology & the Origins of the World  it says “Hydros was essentially identical to Okeanos, the earth-encircling fresh-water river, and his consort Thesis was Tethys.” The Orphics developed this idea in the figures of Hydros and Thesis (the primordial equivalent of Tethys []). The identification of Hydros and Okeanos seems likely because the ocean surrounds the land or the earth, and Latin unda means waves from the same root as hydrus; *wed-¹ ‘water, wet’: Hydrus is positioned right at the mouth of the long celestial river, Eridanus, and rivers flow into seas or oceans.

Hydros (or Hydrus) was the protogenos of the primordial waters. In the Orphic Theogonies Water was the first being to emerge at creation alongside Creation (Thesis) and Mud. The primordial mud solidified into Gaia (Earth) and with Hydros produced Khronos (Time) and Ananke (Compulsion). These two in turn caught the early cosmos in the coils, and split it apart to form the god Phanes (creator of life), and the four ordered elements of Heaven (Fire), Earth, Air and Sea (Water). The Orphic Rhapsodies later discarded the figures the Khronos and Ananke, and have Phanes instead born directly from Hydros and Gaia. The figure of Hydros was ultimately derived by the Orphics from Okeanos, the earth-encircling fresh-water river which Homer described as the source of the gods. His early consort Thesis was likewise the primordial equivalent of Tethys”  [http://www.theoi.com/Protogenos/Hydros.html

“The ends of the generous earth on a visit to Okeanos, whence the gods have risen, and Tethys our mother.”  [http://www.theoi.com/Protogenos/Hydros.html

“The enhydris is a serpent living in the water, for the Greeks call water hudor [hudros]. The hydros is an aquatic snake; people struck by it become swollen. Some people call the ill effects of this boa, because it is remedied with cow (bos) dung.” [The Etymologies of Isidore of Seville, 7th century AD, p.256.]

“There is an animal in the River Nile which is called Hydrus, and it lives in the water. The Greeks call water ‘hydros‘. That is why it is known as an aquatic snake. People swell up with the dropsy [from *wed-¹  above] from its venom, and some call their illness ‘the boa’ (cow-pox) because it can be remedied by the excrement of cows.” [The Book of Beasts: Being a Translation from a Latin Bestiary of the Twelfth Century, p.178]

The link between hydrogen and water:  In 1766-81, Henry Cavendish was the first to recognize that hydrogen gas was a discrete substance, and that it produces water when burned, a property which later gave it its name: in Greek, hydrogen means “water-former.”

The immediate followers of Pliny appear to have identified the ichneumon with the Otter (Gr. enudris). The Gr. enudris was not only the otter, but also a water-snake = hydrus []; ‘ichneumon‘ was the name used for the ‘pharaoh’s rat’ or mongoose (Herpestes ichneumon), which attacks snakes; it can also mean ‘otter‘ []. 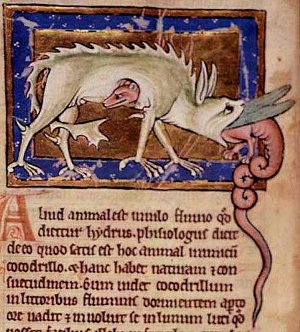 “Enhydros is named from water (compare hudor, ‘water’), for it exudes so much water that you might think there is a gushing fountain closed up in it”. [p.326.] “The enhydros is a small beast so named because it dwells in water (compare hudor, ‘water’), particularly in the Nile. If these beasts discover a sleeping crocodile, first they roll themselves in the mud and then enter the crocodile’s stomach through its mouth, and eat everything inside it, so that the crocodile dies.” [p.253] [The Etymologies of Isidore of Seville, 7th century AD]

Enhydrous means having water within; containing fluid drops. Enhydros are commonly known as ‘water agate’. These are agates that have a sealed bubble of water inside. The enhydros have a thin ‘rind’ of agate and must be tumbled to see the bubbles clearly [].

In a discussion on ‘soc.history.ancient‘ there is an interpretation of the name of the Bronze Age Greeks, the Achaeans, that says “Achaeanous = Ocheanous = Sea Peoples”. Ocheanous would be Oceanus

Oceanus (Okeanos) is the god of the great earth-encircling river Ocean. He had the tail of a serpentine fish and a bull’s horn on his head [See Theoi Project Oceanus]. Wikipedia has a picture of him here

“The Ocean (De oceano) Greek and Latin speakers so name the ‘Ocean’ (oceanus) because it goes around the globe (orbis) in the manner of a circle (circulus), [or from its speed, because it runs quickly (ocius)]. Again, because it gleams with a deep blue color like the sky: Oceanus as if the word were kuaneos (‘blue’, cyan is a greenish-blue). This is what encircles the edges of the land, advancing and receding with alternate tides, for when the winds blow over the deep, the Ocean either disgorges the seas or swallows them back.” [The Etymologies of Isidore of Seville, 7th century AD, p.277.]

Latin ocius, ocior, is cognate with Greek okus, ‘swift’. Greek okeanus, is believed to come from okus, rapid, and nacin, to flow []. Greek okus is at the root of the prefix oxy– in oxytocic (hastening childbirth, okus– + tokos, birth), and accipiter (a genus of hawks, the Gos-hawks and Sparrow-hawks, from *aku-petro-, ‘swift-flying’ from akus + petro-, flying). Some see a plausible connection between Greek okus and Latin equine and Greek hippo, horse, from Indo-European root *ekwo– []. An Indian legend states that the first horse emerged from the depth of the ocean during the churning of the oceans []. [There are connections in mythology with horses and seas or oceans; Homer called Poseidon the god of the oceans and of horses ‘the illustrious shaker of the earth’ [], whose mother was said to have fooled Cronus into swallowing a foal instead of her son (). Poseidon was father of the winged horse Pegasus. Latin mare, meaning ‘the sea’, is a homophone of English mare, a female horse…]