The history of the star: Hoedus 11 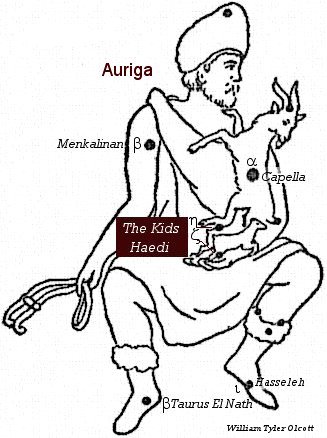 Eta (η) Auriga, Hoedus 11, is one of the Haedi, Kid Goats, a star on the left arm of the Charioteer.

Zeta (ζ Hoedus 1) and Eta (η Hoedus 11) Auriga are called “the Haedi“, “the Kids”. Haedi, or Hyades, is the Latin plural for kid goats; haedus the singular. The correct astronomical name for this star, eta, is Haedi 11. Listed in astrological programs as Hoedus 11

These two stars represent the kid goats in Auriga that their mother, the nanny goat Amalthea who is identified with Capella, put aside in order to the nurse the baby Jupiter/Jove/Zeus.

This is the eastern one of the (Greek) Eriphoi, or Kids, of Hipparchos (circa 160-120 B.C.) and the second-century Greek astronomer Ptolemy, the Haedi of the Latins. Pliny (23-79 A.D.) made of them a separate constellation.

The poet Callimachus, 240 B.C., wrote in an epigram of the Anthologia

Tempt not the winds forewarned of dangers nigh,

When the Kids glitter in the western sky;

Vergil (70-19 B.C.), commending in the Georgics their observation to his farmer neighbors, made special allusion to the dies Haedorum, and with Horace (65-8 B.C.) and Manilius (1st century A.D.) called them pluviales (rainy), the latter author’s

Stormy Haedi . . . which shut the Main

And stop the Sailors hot pursuit of gain.

{p.91} Horace (65-8 B.C.) similarly knew them as horrida et insana sidera and insana Caprae sidera; and Ovid (43 B.C.-18?A.D.) as nimbosi, rainy. They thus shared the bad repute in which Capella was held by mariners, and were so much dreaded, as presaging the stormy season on the Mediterranean that their rising early in October evenings was the signal for the closing of navigation. All classical authors who mention the stars alluded to this direful influence, and a festival, the Natalis navigationis, was held when the days of that influence were past. Propertius (circa 50-16 B.C.) wrote of them, in the singular, as Haedus; Albumasar (805 ?-885, astrological writer of Turkestan), as Agni, the Lambs; the Arabians knew them as Al Jadyain, the Two Young He Goats; and the 17th century German astronomer Bayer, in the plural, as Capellae

The astrological influences of the constellation Auriga

Legend: Auriga represents Erichthonius, son of Vulcan and King of Athens, who was the first to devise a chariot drawn by four horses which he used in order to conceal his greatly deformed feet. The goat and kids depicted in the constellation figure commemorate the goat upon whose milk Jupiter was reared, together with her offspring. [Robson, p.31.]

Influences: According to Ptolemy the bright stars are like Mars and Mercury. The constellation is said to give self-confidence, interest in social and educational problems. Happiness, but danger of great vicissitudes (changes of circumstances effecting one’s life). The native is fond of country life and may be a teacher or have the upbringing of young people. By the Kabalists Auriga is associated with the Hebrew letter Samech and the 15th Tarot Trump “The Devil”. [Robson, p.31-32.]

Auriga is one of the most fortunate constellations in the sky, but may still portend earthquakes if situated unfortunately as regard a solar eclipse. This constellation culminating in a chart presages honors, especially in the field of military and political endeavors. A modern astrologer might add sports whenever ancients mentioned military honors. [Fixed Stars and Judicial Astrology, George Noonan, 1990, p.15-16.].

The astrological influences of the constellation Auriga given by Manilius:

“The Charioteer lifts his team from ocean and wrests his wheels up from the downward slope of the horizon where icy Boreas lashes us with his bitter blasts. He will impart his own enthusiasms and the skills, still retained in heaven, which as driver of a chariot he once took pleasure in on earth (that is, the constellation is identified with Erichthonius). The Charioteer will enable his son to stand in a light chariot and hold in check the four mouths curbed with foam-flecked bits (Erichthonius, who is associated with Auriga, invented the quadriga, or four-horse chariot), guide their powerful strength, and keep close to the curve round which they wheel. Again, when the bolts have been drawn and the horses have escaped from the starting-pens, he will urge on the spirited steeds and, leaning forward, he will seem to precede them in their swift career; hardly touching the surface of the track with his light wheels, he will outstrip the winds with his coursers’ feet. Holding first place in the contest he will drive to the side in a balking course and, his obstruction delaying his rivals, deny them the whole breadth of the circus-track; or if he is placed mid-way in the press, he will now swing to a course on the outside, trusting in the open, now keep close to the pointed turning-post, and will leave the result in doubt to the very last moment. As a trick-rider too he will be able to settle himself now on one, now on a second horse, and plant his feet firmly upon them: flying from horse to horse he will perform tricks on the backs of animals in flight themselves; or mounted on a single horse he will now engage in exercise of arms, now whilst still riding pick up gifts scattered along the length of the circus. He will possess virtuosity in all that is connected with such pursuits.

“Of this constellation, I think, Salmoneus may be held to have been born imitating heaven on earth, he imagined that by setting his  team of four on a bridge of bronze and driving it across he had expressed the crash of the heavens (referring to Phaeton’s disastrous attempt to drive the sun-chariot one day) and had brought to earth Jove’s very self; however, while counterfeiting thunderbolts he was struck by real ones and, falling after the fires he had flung himself, discovered in death that Jove existed. You may well believe that under this constellation was born Bellerophon, who flew amid the stars and laid a road on heaven (The Milky Way): the sky was the field over which he sped, whilst land and sea lay far beneath his feet, and his path was unmarked by footprints. By examples such as these are you to mark the rising figure of the Charioteer”. [Manilius, 1st century A.D., Astronomica, book 5, p. 305-309].

Manilius referring to the Hyades rising:

“The Kids display their quivering chins, promise to mankind of their shaggy backs at a later hour, on the right horizon where the north wind blows. Think not that hence is fashioned a product of severe mien, that hence are born stern-faced Catos (Cato the Censor), an inflexible Torquatus (who killed his son) and men to repeat the deed of Horatius (who killed his sister). Such a charge would be too much for the sign, nor does such greatness befit the frisking Kids, who rejoice in frivolity and stamp their young with a wanton breast. These abandon themselves to playful sport and nimble activity, and spend their youth in fickle loves. Though honor never inspires them to shed their blood, lust often drives them to do so, and their base desires cost even their lives; to perish thus is their least disgrace, since their triumph is a triumph of vice. The Kids also give to those born under them the custody of flocks, and beget a shepherd of their own kind, one to hang a pipe round his neck and draw from its different stops melodious strains”. [Manilius, 1st century A.D., book 5 of Astronomica ]

Manilius referring to the Hyades setting:

“But when the heedless Kid, like one astray in secluded dells, looks for his brethren’s tracks and rises at a distance far behind the flock, he fashions an adroit mind and a spirit which occupies itself with business of every kind, which falters not under cares, and which is never satisfied with home. Such men are the servants of the state, passing through the magistracies and judicial offices. When he is there, the auctioneer’s spear (a spear was fixed in the ground at public auctions) will not look in vain for a lifted finger or confiscated goods lack a bidder; when he is there, no criminal will go scot-free or any debtor to the treasury defraud the state. He is the city’s attorney. In addition, he indulges in a host of love affairs, and at the Wine-god’s behest drops public business, when he reveals himself as agile at dancing and more supple than performers on the stage”. [Manilius, 1st century A.D., book 5 of Astronomica].

The astrological influences of the star Hoedus 11

In classical times it had a bad reputation, especially among mariners who dreaded its presaging the storms on the Mediterranean. When rising Hoedus 1 and its companion Hoedus 11, indicates a native who may be petulant and lascivious, one who is said to be involved in depraved and vicious desires. If other factors in the chart confirm these stars the native’s whole appearance to others may be that of a lie a person who promises one thing but hides another thing in his heart. Ancient astrologers asserted these two stars presaged cowards in battle and even suicide or early death when setting (especially when the Descendant is also in square or opposition aspect to Saturn). When Mars is conjunct the Descendant as either Hoedus 1 or Hoedus 11 is setting the indication is for religious fanaticism and ruin as a result of the resultant excesses. [Fixed Stars and Judicial Astrology, George Noonan, 1990, p.17.]