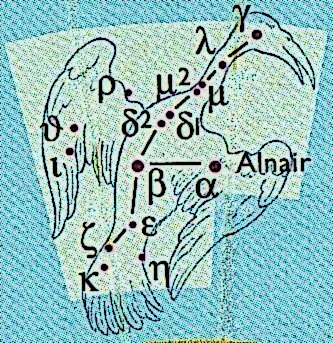 The constellation was added by Bayer in 1603.

Cranes are noted for their elaborate courtship dances; humans on stilts copied the dance. “Cranes are the exotic dancers of the bird kingdom. Their gyrations have been compared to the antics of fervent pioneer preachers leading their congregations” []. They are credited with great diligence, intelligence and vigilance; they are reported to post sentries while they sleep. They spend a long time preening their feathers and paint themselves with mud to camouflage themselves. Greek letters of the alphabet came from myths about cranes. The crane was used as a symbol of the astronomer by the Ancient Egyptians.

“Cranes (grus) took their name from their particular call, for they whoop with such a sound. When they fly, they follow a leader in formation like a letter (i.e. Greek lambda, an upside down V shape). Concerning them Lucan says (CivilWar 5-716): And the letter-shape is disturbed and lost in their scattered flight. They seek the heights, from which they can more easily see which lands to make for. The one leading the flock chides with its voice, but, when it begins to grow hoarse, another crane takes its place. At night they divide up the watches, and alternate their vigils; they hold stones in their extended claws to let it be known if they fall asleep – the noise (i.e. of the stones dropping) indicates the need to be on the alert. Their color reveals their age, for they turn black as they grow old.” [The Etymologies of Isidore of Seville, 7th century AD, p.264.]

The word ‘pedigree‘ comes from the Old French phrase, ‘pie (pied) de grue‘, which means ‘foot of a crane’. The pedigree diagram (symbol /|) resembles the branches coming out of a crane’s foot []; for the shape of the sign used in showing lines of descent in genealogical charts.

The Trojans were compared to migrating cranes. The Trojans were always at war with the Pygmies (might be adjacent Sculptor), the word gruesome might describe the savage battles:

“The Iliad compares the noisy Trojan warriors to shrieking cranes descending upon the silent Pygmy soldiers (the Greeks or Achaeans) in the following passage: “The Trojans came with cries and the din of war like wildfowl when the long hoarse cries of cranes sweep on against the sky and the great formations flee from winter’s grim ungodly storms, flying in force, shrieking south to the ocean gulfs, speeding blood and death to the Pygmy warriors, launching at daybreak savage battle down upon their heads” [].

In every land where they appear cranes have always been a symbol of longevity. For cranes living in the wild an age of up to 60 years has been cited, and there is one record of a captive Siberian crane living for 83 years and fathering chicks at age 78. By comparison swans only live to around thirty years. The partly gray feathers of cranes, and some species having predominantly gray feathers, might symbolically suggest aging. Geranos is the Greek for crane and geras, from where we get the word geriatrics, is old age, geron, ‘old man’, gerus, ‘old woman; wrinkled skin’, from Indo-European root *gere- ‘To grow old’. Derivatives: ageratum (a-, without; + geras, old age; a plant that is called ageless or everlasting), geriatrics (from Greek geras, old age), geronto– (from Greek geron, stem geront-, old man), progeria (aging disease). [Pokorny ger– 390. Watkins

“Horapollo, the grammarian of Alexandria, about A.D. 400, tells us that the crane was the symbol of a star-observer in Egypt, presumably from its high flight” [Allen, Star Names], or maybe from a habit of looking up at the sky as a number of pictures of cranes on this website show? The term ‘Magos‘ was used in the Hellenistic world rather loosely for astrologers, astronomers, and magicians (there was no distinction in the Hellenistic era drawn between astrology and astronomy) []. The magus were the Zoroastrian priestly caste of the Medes and Persians []. Magi is used in English for the three ‘Wise Men’ who visited the infant Christ.

“The first interpreters of the stars were called Magi (magus), as we read of those who made known the birth of Christ in the Gospels; afterwards they only had the name mathematicus.” [The Etymologies of Isidore of Seville, 7th century AD, p.183.]

A crane, meaning also ‘a machine for raising weights’ is so called from the long neck of the instrument. People were struck with some kind of similarity between the long-legged bird picking up his food with his long beak and their rude engines for lifting weights. In Greek, too, geranos has both meanings [, p.386]. In Greek and Roman theatre, a crane was used as a stage prop to create the special effects of flying characters, it could lift actors into the air portraying the appearance of gods in flight, hence the Latin term deus ex machina (‘god from the machine’). It was usually known as the mechane (‘machine‘), but also known as the geranos (‘crane’) or krade (‘branch’) [] [see picture].

The words mechane, and magus, come from the Indo-European root *magh- ‘To be able, have power’. Derivatives: may¹ (from Old English mæg, to be strong, be able), dismay (to deprive of might or the power to act as a result of fear or anxiety), might¹ (power), almighty, main (most important, from Old English mægen), machine, mechanic, mechanism, mechano-, magic, magus, (these words from Old Persian magu, member of a priestly caste < ‘mighty one’). [Pokorny magh– 695. Watkins

The verb ‘crane‘, to extend the neck, is also related. Cranes fly with necks outstretched, not pulled back like many other birds.

Cranes have elaborate courting displays or ‘dances’. In mythology the Crane Dance called Geranos, was performed by Theseus after his escape from the Labyrinth. Theseus had used a ball of thread to find his way out of the Labyrinth, and the dance he performed with the Athenians who escaped with him was an imitation of the windings of the Labyrinth. The ball of thread might relate to the chromosomes which carry the genes, they are coiled, threadlike structures of DNA? and why the word pedigree is related to ‘crane’ and ‘grus’. The Labyrinth (see Hercules) is also the term for a system of fluid passages in the inner ear, including both the cochlea which is part of the auditory system, and the vestibular system which provides the sense of balance. It is named by analogy with the mythical maze that imprisoned the Minotaur, because of its appearance []. [The word ear (auris) might be adjacent Pisces Australis and Grus was once part of that constellation.] There are Mechanoreceptors in the cochlea of the ear that detect sounds and the motion of the body. Sound is a mechanical wave, meaning it produces vibrational energy in the medium through which it moves, such as air. The crane standing on one leg might also suggest something to do with balance. [Hercules whose name might be resolved into ‘listening in the air’ performed twelve labors, and the word ‘labyrinth’ may be related to ‘labor’ as explained on Hercules’ page].

The phrase “the cranes of Ibycus” became a proverb among the Greeks for the discovery of crime through divine intervention. It relates to the story of  Ibycus, a Greek lyric poet, of the 6th century BC. While in the neighbourhood of Corinth, the poet was mortally wounded by robbers. As he lay dying he saw a flock of cranes flying overhead, and swore “Those cranes will avenge me.” Shortly afterward the robbers were sitting in a theater in Corinth and saw a flock of cranes flying by. One joked to his friend “there go the avengers of Ibycus” []. The remark was overheard and the robbers were arrested. Cranes pointed to the killers by mysteriously circling over the head of one of the guilty. This old proverb has been referred to as “The Cranes of Ibycus” []. This legend is probably a play on the similarity between the poet’s name and the Ancient Greek word for ‘crane’ (ibyx) [].

The Ancient Greek word for was ‘crane’ (ibyx) []. It may be that the crane of Europe was equivalent to the similar wading bird, the ibis, of the Egyptians. “Abis, the Egyptian Crane … the Greeks expressed it Ibis” [A Mythological, Etymological, and Historical Dictionary, Bryant, Holwell, 1793, p.2]. The ibis-headed god, Thoth, was a scribe, whose pen repeatedly dipped in ink in a manner that the long beaks of the ibises dipped into the mud [10]. The word nib (n-ib, a bird’s beak, and the tip of a pen, might be related to this source; “nib meant an ibis” [Cleopatra’s Needle, p.58]. [Egyptian hib is the official translation for ‘ibis’] 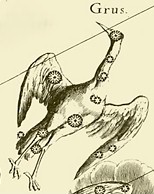 Grus, the Crane, is one of the so-called Bayer groups (Grus was named by Johann Bayer, as listed in his 1603 star atlas), laGrue of the French and Italians, derKranich of the Germans; and the title is appropriate, for Horapollo, the grammarian of Alexandria, about A.D. 400, tells us that the crane was the symbol of a star-observer in Egypt, presumably from its high flight as described in our motto.

Caesius, who carried his biblical symbols even to the new constellations, imagined this to be the Stork in the Heaven of Jeremiah viii, 7, although the Crane occurs in the same verse; but Julius Schiller combined it with Phoenix in a representation of AarontheHighPriest

The Arabians included its stars in the Southern Fish (Pisces Austrinus), Al Sufi giving its alpha, beta, delta, theta, iota, and lambda as unformed members of that constellation.

The components, with the exception of the lucida, form a gentle curve southwest from this Fish, and among them are stars noted in astronomy.

{Page 238} One hundred and seven are catalogued by Gould as being visible to the naked eye.

alpha (Al Nair), marking the body of the bird, is the conspicuous 2d-magnitude southwest from Fomalhaut when the latter culminates in autumn evenings, itself coming to the meridian on the 11th of October. It was Al Tizini’s Al Na’ir, the Bright One, i. e. of the Fish’s tail (Pisces Austrinus), when that constellation extended over the stars of our Grus. The Chinese knew it as Ke

beta, a 2.2-magnitude red star, was Al Tizini’s Rear One at the end of the tail of his Fish (Pisces Austrinus), thirty-five minutes of arc to the eastward from alpha. It is in the left wing of the Crane.

gamma, a 3d-magnitude,was the same author’s Al Dhanab, the Tail itself (of Pisces Austrinus), but now marks the eye in the bird’s figure.

pi, a 6.7-magnitude deep crimson star, and its somewhat brighter white companion, pi2, are like “little burnished discs of copper and silver, seen under strong illumination.”

{p.238} The alternative title for the stars of Grus;

is now seldom, if ever, used, nor can I find any record of its inventor, or date of its adoption as a constellation name. Chilmead’s Treatise contains this reference to it:

“The Phoenicopter we may call the Bittour [the old English word for Bittern]. The Spaniards call it Flamingo: and it is described with the wings spread abroad, and as it were striking with his bill at the South Fish (Pisces Austrinus), in that part where he boweth himselfe: This Asterisme consistith 13 Starres: of which, that of the second magnitude in his head is called, the Phoenicopters Eye: and it hath two other Stars also of the same magnitude, one in his backe, and the other in his left wing. And those two which are in the middle of his necke, Paulus Merula in his first booke of his Cosmography, calleth his Collar or Chaine.”

The absence of our titles in the foregoing description would show that the Bittern, or Flamingo, was the popular English figuring and title in the early part of the 17th century.