The history of the star: Grafias 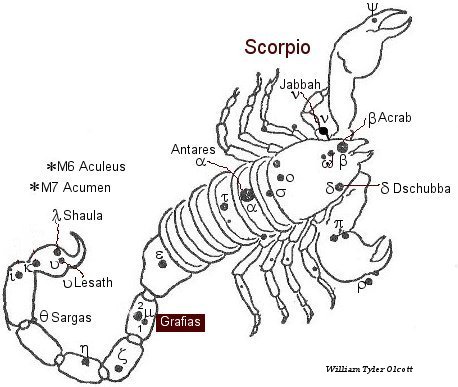 Zeta (ζ) Scorpius, along with the smaller zeta (ζ), is situated in the tail of the Scorpion.

Ptolemy makes the following observations: "The bright stars in the front of the body of Scorpio have an effect similar to that produced by the influence of Mars, and partly to that produced by Saturn: the three in the body itself . . . are similar to Mars and moderately to Jupiter: those in the joints of the tail are like Saturn and partly like Venus: those in the sting, like Mercury and Mars." By the Kabalists Scorpio is associated with the Hebrew letter Oin and the 16th Tarot Trump "The Lightning-Struck Tower." [Robson, p.60-61.]

"By virtue of his tail armed with its powerful sting, wherewith, when conducting the Sun’s chariot through his sign, he cleaves the soil and sows seed in the furrow, the Scorpion creates natures ardent for war and active service, and a spirit which rejoices in plenteous bloodshed and in carnage more than in plunder. Why, these men spend even peace under arms; they fill the glades and scour the woods; they wage fierce warfare now against man, now against beast, and now they sell their persons to provide the spectacle of death and to perish in the arena, when, warfare in abeyance, they each find themselves foes to attack. There are those, too, who enjoy mock-fights and jousts in arms (such is their love of fighting) and devote their leisure to the study of war and every pursuit which arises from the art of war." [Manilius, Astronomica, 1st century AD, p.239-240].