The history of the star: Gienah 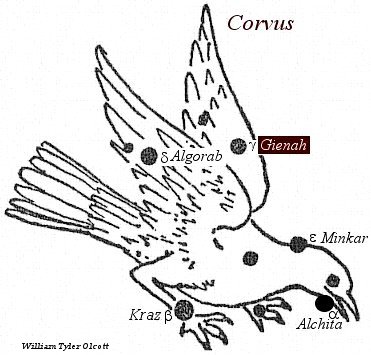 Gamma (γ) Corvus, Gienah, is a star in the left wing of the Raven.

Gienah is from the 15th century Tartar astronomer Ulug Beg’s Al Janah al Ghurab al Aiman, the Right Wing of the Raven, although on modern charts it marks the left. Algorab, given in the Alfonsine Tables to this star, is now usually applied to delta (δ Algorab).

Gamma (γ) is the brightest member of the constellation Corvus, and some Chinese authorities said that it alone marked their 11th sieu (Chinese Moon Mansion).