The history of the star: Giansar

Lambda (λ) Draco, Giansar, is a small orange star in the Dragon’s tail. 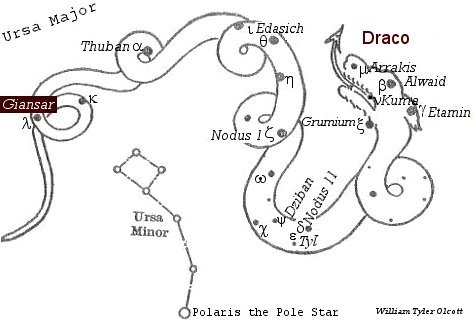 Giansar and Giauzar are variously derived: either from Al Jauza‘, the Twins,— a little star is in close proximity,— or from AlJauzah, the Central One [the Arabs usually knew the constellation Orion as Al Jauzah, the Central One], as it is nearly midway between the Pointers (of Ursa Major; beta Merak and alpha Dubhe) and Polaris; or, and still better, from the Persian Ghauzar,— the Persian astronomer Al Biruni ‘s (973-1048 A.D.)  Jauzahar of Sasanian origin,— the Poison Place, referring to the notion that the nodes, or points where the moon crosses the ecliptic, were poisonous because they “happened to be called the Head and Tail of the Dragon.” [the north node

is the head, and the south node

is the tail, i.e. the moon’s nodes]. This singular idea descended into comparatively modern times, and, although these points are far {p.211} removed from Draco, still obtains in the name for lambda (λ this star Giansar). Juza is another popular title.

It also has been known as Nodus secundus, the Second Knot, possibly because thus located on some drawings; yet it is far removed from delta (δ Nodus 11), which usually bears that name.

In China it was Shang Poo, or Shaou Poo

Although the last lettered star in the figure of the constellation Draco, it lies at a considerable distance from the end, as figured on the atlases of Heis and Argelander.

“Hebrew name Giansar, ‘the punished enemy'”. (Bullinger The Witness of the Stars ).