The history of the star: Kornephoros

from p.243 of Star Names, Richard Hinckley Allen, 1889.
[A scanned copy can be viewed on this webpage 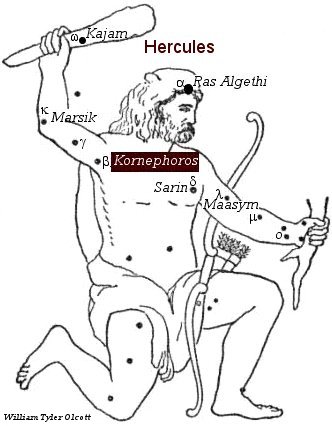 Beta (β) Hercules, Kornephoros, is a pale yellow star on the right shoulder of the Kneeling Man.

Korneforos and Kornephoros are from the Greek Korunephoros which we have seen applied to the whole figure of the constellation Hercules. Burritt’s Atlas of 1856 has KornephorusvelRutilicus, {p.244} perhaps the diminutive of rutilus, “golden red,” or “glittering,” an adjective applied to Arcturus; but this term is by no means appropriate for beta (β Kornephoros). The AraboLatin Almagest of 1515 reads rutillico, adding propinque cillitico, this last unintelligible unless explained by the Basel edition of 1551 as penes axillam seu scapulam; so that we may perhaps consider the alternative title to be from the barbarism used to show the star’s position on the shoulder of the figure. Indeed, the 17th century German astronomer Bayer said of it, Rutilicum barbari dicunt. The German astronomer Ideler (1766-1846), however, asserted his belief that it was from rutellum, the diminutive of rutrum, a sharp instrument of husbandry or war, in Roman times, that Hercules in some early representations, especially on the Arabic globes, is carrying. The Century Cyclopedia gives Rutilico as a rarely used name.

{p.244} beta (β Kornephoros) was the Chinese Ho Chung, In the River, while the 4th-magnitude gamma (γ) was Ho Keen, Between the River.

Hercules, the figure on bended knee and called by the Greek name of Engonasin, about whose origin no certainty prevails. Of this constellation is begotten the desertion, craftiness, and deceit characteristic of its children, and from it comes the thug who terrorizes the heart of the city. If perchance his mind is moved to consider a profession, Engonasin [a Greek title for constellation Hercules meaning Kneeler] will inspire him with enthusiasm for risky callings, with danger the price, for which he will sell his talents: daring narrow steps on a path without thickness, he will plant firm feet on a horizontal tightrope; then, as he attempts an upward route to heaven, (on a sloping tightrope) he will all but lose his footing and, suspended in mid-air, he will keep a multitude in suspense upon himself” [Manilius, Astronomica, 1st century, AD, p.353.]