The history of the nebula Facies 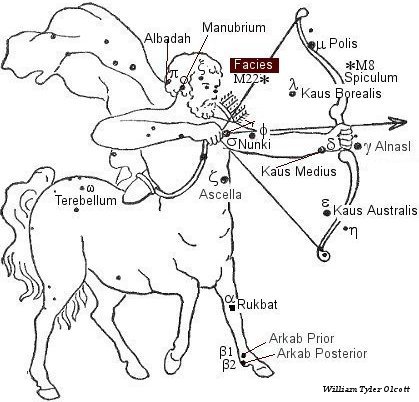 M22 Sagittarius, Facies, is the nebula in front of the Archer’s face.

The astrological influences of the nebula Facies

The nebula in the Archer’s Face is of the nature of the Sun and Mars, and causes blindness, defective sight (all nebula can cause blindness), sickness, accidents and a violent death. [Robson, p.165.]

Much blamed for accidents and broken limbs and so on. The Latin name is from the verb Facere, to make or do something, and it is often said to portend accidents due to the victim’s own careless actions. Naturally, there is a positive side to Facies, it symbolizes well that kind of Sagittarian who goes out to climb mountains, race cars, enter the ski-jump team or the Grand National steeplechase, making it right to the top and no doubt breaking a few bones along the way. On the more philosophical side it will mark those who must see their outlook and beliefs carried into practical effect somewhere, so that they go out on missions, set up their own churches and centers engage in good works of famine or refugee relief and so on. Inevitably they get hurt at times, but perhaps find compensation in the value of their works. [The Living Stars, Dr. Eric Morse, p.94-95.].