The history of the star: Erakis

from p.158 of Star Names, Richard Hinckley Allen, 1889.
[A scanned copy can be viewed on this webpage 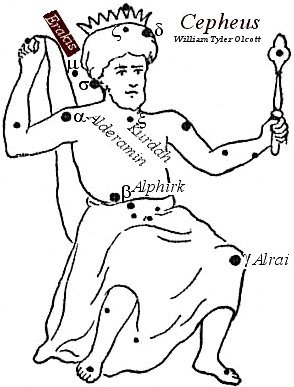 Mu (μ) Cepheus, Erakis, is a star close to the right ear of the Ethiopian King.

About 5° east of the head of Cepheus, is Sir William Herschel’s celebrated Garnet Star, and so entered by Giuseppe Piazzi, Italian astronomer (1746-1826) in the Palermo Catalogue, yet strangely omitted from Flamsteed’s list, perhaps owing to its variability. This, suspected by Hind in 1848, was confirmed by Argelander. {p.159} it is one of the deepest-colored stars visible to the naked eye, and comparison with the near-by alpha (α Alderamin) will show its peculiar tint, which, however, sometimes changes to orange.

"Cepheus will not engender dispositions inclined to sport. He fashions faces marked by a stern demeanor, and moulds a countenance whereon is depicted gravity of mind. Such men will live on worry and will incessantly recall the traditions of a bygone age and commend old Cato’s maxims [Cato the censor].