“He, O Castor, was a courser worthy thee …
Coal-black his color, but like jet it shone:
His legs and flowing tail were white alone.”
Dryden: Ovid’s Metamorphose, xii.

Equuleus is the second smallest constellation in the Northern Hemisphere, tucked between the head of Pegasus and the dolphin, Delphinus. There is no certain legend applied to Equuleus and it is supposedly created by the second-century Greek astronomer Ptolemy because it was added to his Algamest, though according to Geminos (130 – 60 B.C.) it was created by Hipparchos (Hipparchus), the Greek astronomer who lived around 190-120 B.C. Hipparchus mapped the position of 850 stars in the earliest known star chart. His observations of the heavens form the basis of Ptolemy’s geocentric cosmology [AHD] [Allen argues on p.218 of Star Names that because Ptolemy did not mention the star near the south pole, Achernar, that his catalogue was not based upon original observations, but drawn from the now lost catalogue of Hipparchos]. Hipparchos is also credited with discovering the precession of the equinoxes, or as Allen believes (p.209), may have been merely the publisher of that discovery made by the Egyptians, or perhaps adopted by them from Chaldaea.

Equuleus is the head of a horse with a flowing mane which the Arabs called AlFarasalAwwal, ‘the First Horse’, in reference to its rising before Pegasus. Ptolemy called it Ippou Protome; Ippou, or hippo, is Greek for horse. Greek protome means head or bust (in sculpture), with later astronomers it was Equus primus and prior. The image is traditionally a figure of a horse or foal, said to represent either Celeris, the brother of Pegasus, given by Mercury to Castor (Ovid, Met., xii. 408); or Cyllarus, given to Pollux by Juno, (Virgil, Geor., iii. 90). Others say he was Pegasus’ offspring and a flying colt, or the creature struck by Neptune’s trident from the earth when contesting with Minerva for superiority of Athens. 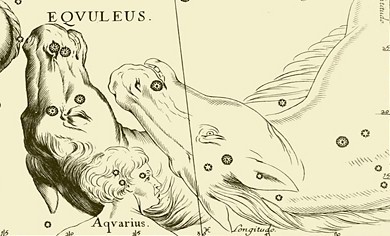 Hevelius, Firmamentum, 1690, depicts the head of Aquarius (Ganymedes) encroaching onto the heads of the two horses; Pegasus and Equuleus. A Homer poem tells how Ganymedes was carried off by Zeus and to compensate the father of Ganymedes, King Laomedon of Troy, Zeus gave him two horses [].

This horse is identified with Celeris, the word celeris is related to Greek keleuein, ‘to urge on, exhort, order’, kellein, ‘to drive on’, Greek keles, ‘race horse’, ‘racing boat’, from the Indo-European root kel- ‘To drive, set in swift motion’. Derivatives: hold (keep in one’s grasp), behold (to look upon), upholsterer, halt(to stop), avast (a command to stop or desist), celerity, acceleration, accelerate, accelerant (a substance that is used as a catalyst, as in spreading an intentionally set fire). Possibly further suffixed form *keles-ri-; celebrate, celebrant, celebrity, (these words from Latin celeber, which originally meant ‘attend in great numbers, ‘to attend a festival’ from celeber, celebris, celebre, ‘thronged, frequented, well-known’). [Pokorny 5. kel– 548. Watkins

Kleinsupplies more cognates tokel-‘:acolyte(one who assists the celebrant in the performance of liturgical rites, from Greekakholouthosa- +keleuthosis cognate with Lithuaniankelias, ‘way’,keliauju, ‘I journey’, from Indo-European base *qeleu-, enlargement of*qel-,*kel-, ‘to drive’, whence Latinceler, ‘swift’),clonus(from the Greek for ‘violent, confused motion’, is a series of involuntary muscular contractions due to sudden stretching of the muscle),hodden(a coarse kind of cloth made of undyed wool, in Scotland),holt(lair of an animal),proceleusmatic(a metrical foot of four short syllables, fromGreek prokeleusmatikos, ‘to give orders before’, fromkeleuein, to rouse to action. “The ancient proceleusmatic song by which the rowers of galleys were animated may be supposed to have been of this kind.” [Samuel Johnson]).

“Some of the mythologists said that the constellation represented … the creature struck by Neptune’s (Poseidon) trident from the earth when contesting with Minerva (Athena) for superiority” (over Athens. See that myth below). [Allen, Star Names].

Or it could be the foal (Equuleus is also said to be a foal) Rhea tricked Cronus into swallowing as a substitute for their son Poseidon (an aspect of Poseidon)? Poseidon is said to have invented horse racing. Horses were sacrificed in his honor []. “Some storytellers insisted he invented the horse by smashing his trident down upon a rock. In any case, it is said that he invented horse racing” [] Pegasus was a son of Poseidon because he mated with the Gorgon Medusa in that form.

“Poseidon was a son of Cronus and Rhea. In most accounts, he is swallowed by Cronus at birth. However in some versions of the story, he, like his brother Zeus, did not share the fate of his other brother and sisters who were swallowed by Cronus. He was saved by his mother Rhea who tricked Cronus into eating a foal instead, saying that she had given birth to a horse. Poseidon was raised by the Telchines on Rhodes, just as Zeus was raised by the Korybantes on Crete” [].

The myths associated with Equuleus

“Some of the mythologists said that the constellation represented the creature struck by Neptune’s (Poseidon) trident from the earth when contesting with Minerva (Athena) for superiority” [Allen, Star Names]:

“Athena (Minerva) became the patron goddess of the city of Athens, in a competition with Poseidon (Neptune). They agreed that each would give the Athenians one gift and the Athenians would choose whichever gift they preferred. “Neptune struck the ground with his trident and there sprang forth a horse. The gods were filled with wonder at the sight of the noble animal, and when Neptune explained how useful it would be to man, they all thought that the victory would be his. Minerva then produced an olive tree; at this all the gods laughed with scorn, but when the goddess, heedless of their laughter, had explained how all its parts–the wood, the fruit, and the leaves–could be used by man, how it was the sign of peace while the horse was the symbol of war, they decided that Minerva had won, and since her name among the Greeks was Athene, she gave to the city the name of Athens”. http://www.sacred-texts.com/time/smd/smd13.htm

There might be a connection between the Greek words; polis, city, and polos, foal:

“Graves (1959: I-171) suggests that Athene Polias (‘of the city’) may have originally been Athene Polias (goddess of the local horse cult), from the Greek polos meaning ‘foal’”. [http://blacktaj.homestead.com/files/documents/The_Sumerians_and_Gemini.pdf].

This horse is also said to be Cyllarus (Greek Kullaros), given by Mercury to Castor of whom Ovid describes:

“[In the battle of the Kentauroi and Lapithes:] Nor did his beauty ransom [centaur] Cyllarus, fighting that day, if hybrids such as he be granted beauty. His beard was just beginning, a golden beard, and golden tresses fell down on his shoulders reaching to his flanks. High-mettled grace shone in his face; his neck, chest, shoulders, hands and every manly part seemed like a sculptor’s much-praised masterpiece. Unblemished too his equine shape, nor less fine than his man’s. With horse’s head and neck he’s make fit mount for Castor, so high stood his chest-muscles, so rideable his back. Jet black he was, the whole of him, save that his tail was white and legs were milk-white too. Many a centauress would be his mate, but one had gained his heart, [she-centaur] Hylonome. In the high woods there was none comelier of all the centaur-girls, and she alone by love and love’s sweet words and winning ways held Cyllarus, yes, and the care she took to look her best (so far as that may be with limbs like that). She combed her glossy hair, and twined her curls in turn with rosemary or violets or roses, and sometimes she wore a pure white lily. Twice a day she bathed her face in the clear brook that fell from Pagasae’s high forest, twice she plunged her body in its flow, nor would she wear on her left side and shoulder any skin but what became her from best-chosen beasts. Their love was equal; on the hills they roamed together, and together they would go back to their cave; and this time too they went into the Lapithae’s palace side by side and side by side were fighting in the fray. A javelin (no knowing from whose hand) came from the left and wounded Cyllarus, landing below the place where the chest joins neck – slight wound, but when the point was pulled away, cold grew his damaged heart and cold his limbs. Hylonome embraced him as he died, caressed the wound and, putting lips to lips, she tried to stay his spirit as it fled. And when she saw him lifeless, she moaned words that in that uproar failed to reach my ears; and fell upon the spear that pierced her love, and, dying, held her husband in her arms.” – Ovid, Metamorphoses 12.210 http://www.theoi.com/Georgikos/KentaurisHylonome.html

In myth the Gemini Twins ride two horses “the immortal steeds Cyllarus and Harpagus” []. It seems that Equuleus is Cyllarus, and Harpagus must be Pegasus

The two centaur horses, Cyllarus and his wife Hylonome, might relate to these two adjacent constellations Equuleus and Pegasus. Cyllarus is identified with Equuleus. Hylonome ‘browser of the woods’, is from the district Pagasae, similar to ‘pegasus’, and ‘pagan’ etc. (from the root pag– as explained on the Pegasus page).

… the flaming shoulders of the Foal of Heaven.

Equuleus, the Foal that modern Latin critics would turn into Eculeus, lies half-way between the head of Pegasus and the Dolphin (Delphinus), marked by the trapezium of 4th- to 5th-magnitude stars, — alpha, beta, gamma, and zeta, — although Argelander catalogues nine others, and Heis twelve down to 6.7 magnitude. Thus “the flaming {Page 213} shoulders” of our motto are lacking here, and the reference may be to Pegasus, to which the characterization certainly is more appropriate.

The Germans call it Fullen, the Filly, and Kleine Pferd, which with us is the Little Horse, the French Petit Cheval, and the Italian Cavallino

This constellation was named of almost no writer, saving Ptolomee and Alfonsus who followith Ptolemy, and therefore no certain tale or historic is delivered thereof, by what means it came into heaven; but we know that Geminos mentioned it as having been formed by Hipparchos, its stars till then lying in the early Dolphin. Still Hipparchos did not allude to it in his Commentary, nor did Hyginus, Manilius, or Vitruvius, a century after him.

Ptolemy catalogued it as Ippou Protome, this last word equivalent to our Bust for the upper part of an animal figure; but with later astronomers it was Equusprimus and prior, as preceding Pegasus in rising; while from its inferior size come our own title and Equulus, Equiculus, and EquusMinor. Gore’s translation of AstronomicPopulaire, following Proctor, has Equus, the larger Horse being Pegasus

Ptolemy’s idea of the incompleteness of the figure was repeated in the Equi Sectio, Equi Praesectio, Sectio equina, Sectio Equi minoris, Semi-perfectus, and Praesegmen of various authors and Latin versions of the Syntaxis and of the AlfonsineTables; the Almagest of 1551 gave Praecisio Equi

The Arabians followed Ptolemy in calling it AlKitahalFaras, Part of a Horse, Chilmead’s KataatAlfaras; AlFarasalThani, the Second Horse, alluding either to its inferior size, or to the time of its adoption as a constellation; and AlFarasalAwwal, the First Horse, in reference to its rising before Pegasus. From the first of these comes the modem Kitalpha (Kitalpha is the alpha star), sometimes applied to the constellation, and generally to the brightest star. Riccioli’s ElmacAlcheras certainly is a barbarism, — not unusual, however, with him; but La Lande’s rarely used Hinnulus, a Young Mule, has more to commend it.

With the Hindus it was another of their Acvini, the Horsemen, although their figuring resembled ours.

Some of the mythologists said that the constellation represented Celeris, the brother of Pegasus, given by Mercury to Castor; or Cyllarus, given to Pollux by Juno; or the creature struck by Neptune’s trident from the earth when contesting with Minerva for superiority; but it also was connected {Page 214} with the story of Philyra and Saturn. Caesius, in modern times, associated it with the King’s Horse that Haman hoped for, as is told in the BookofEsther; and Julius Schiller, with the Rosa mystica

The constellation comes to the meridian on the 24th of September.