The history of the star: Enif

from p.327 of Star Names, Richard Hinckley Allen, 1889.
[A scanned copy can be viewed on this webpage] 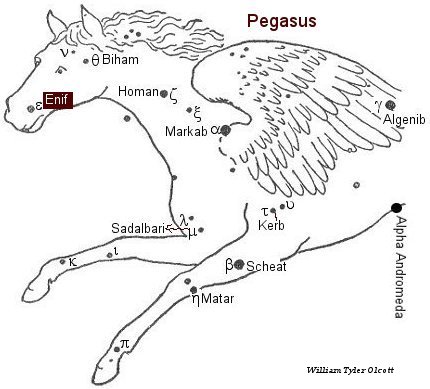 Epsilon (ε) Pegasus, Enif, is a triple star, yellow, and blue, on the nose of the Winged Horse.

Enif, Enf, and Enir, all titles for this, are from Al Anf, the Nose, by which the Arabians designated it. The 16th century French scholar Scaliger had Enf Alpheras, and the 17th century German astronomer and ephemeris creator Schickard Aniphol Pharasi. It was also Fum al Faras, the Horse’s Mouth; and Al Jahfalah, the Lip, this last being found on one of their globes.

The 17th century German astronomer Bayer quoted from “the interpreters of the Almagest” Grumium and Muscida, respectively Jaw and Muzzle, so describing its position; but these have become proper names for xi (ξ) Draco (Grumium) and pi (π) Ursa Major. Flamsteed knew it as Os Pegasi.

Legend: Pegasus was born from the blood of Medusa (see Algol) after Perseus had cut off her head, and was afterwards tamed and ridden by Bellerophon. Being weary of earthly affairs Bellerophon attempted to fly to heaven but fell off, and Pegasus continued his course, entered heaven and took his place among the stars. [Robson*, p.56.]

Influences: According to Ptolemy the bright stars are like Mars and Mercury. The constellation gives ambition, vanity, intuition, enthusiasm, caprice and bad judgment. [Robson*, p.56.]

The Pegasus Syndrome, as exemplified in the legends of Perseus and Bellerophon, is concerned with the innate ability possessed by some people to negotiate difficulties by rising above them, on the one hand, and the danger of overreaching themselves, on the other. Pegasus, by birth, is the child of Medusa and Neptune, symbols of ‘wisdom’ and ’emotion,’ respectively, which shows the dichotomy of his nature. As in the story, Bellerophon attempted to fly to Olympus (overreach his potential). He believed that Pegasus was subject to his will. However, it was Pegasus who made it to Olympus, while Bellerophon was tossed back to earth, lame and reproached by others. It is unwise to take any situation for granted as the ‘lesser’ person (or, in this case, beast) may be the very one to teach us the much needed lesson in humility. Pegasus is also indicative of a specific mission in life which the inquirer will always find the time and energy to pursue, although the path may be sewn with difficulties (the Chimaera) and limitations (Bellerophon’s doubt or arrogance). So, the Pegasus Syndrome is the seeming ability to “fly over any situation,” though the reverse may be a lesson in humility, being “taken down a peg,” as it were. [Rich’s Pegopedia http://thanasis.com/pegasus.htm].

The astrological influences of the star Enif