The history of the star: Edasich 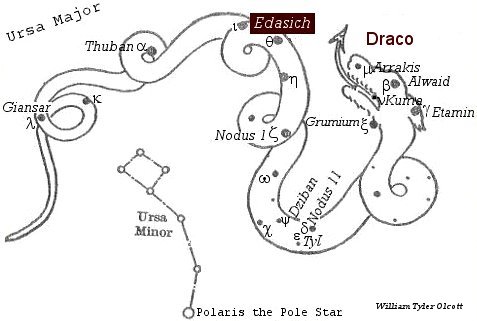 Iota (ι) Draco, Edasich, is an orange star in the Dragon.

The English astronomer Smyth (1788-1865) mentioned this as Al Dhiba‘ of the Dresden globe and of the 15th century Tartar astronomer Ulug Beg, but the 13th century Persian astronomical writer Al Kazwini had called it Al Dhih, the Male Hyaena, from which comes Ed Asich, its usual title now, the Eldsich of the Century Cyclopedia

In China it was Tso Choo, the Left Pivot.

It marks the radiant point of the Quadrantid meteors of the 2nd and 3rd of January, so called from the adjacent Mural Quadrant.