The history of the star: Dorsum 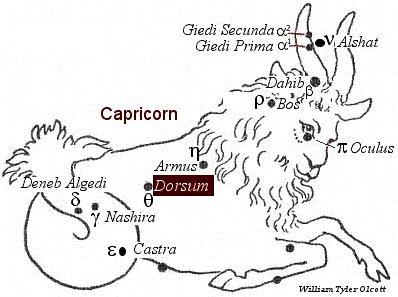 Theta (θ) Capricornus, Dorsum, is a star on the back of the Goat.

Dorsum is from Latin, "the back" because of its position on the back of the Goat.

The Latin word dorsum is related to the words; dorsal, dossier, and endorse

Influences: Ptolemy’s observations are as follows: "The stars in the horns of Capricorn have efficacy similar to that of Venus, and partly to that of Mars. The stars in the mouth are like Saturn, and partly like Venus: those in the feet and in the belly act in the same manner as Mars and Mercury: those in the tail are like Saturn and Jupiter." By the Kabalists this constellation is associated with the Hebrew letter Yod and the 10th Tarot Trump "The Wheel of Fortune." [Robson, p.36.]

The astrological influences of the star Dorsum

With Sun or Mars: Danger of bites from venomous creatures. [Robson, p.164.]