The history of the star: Deneb Kaitos

Beta (β) Cetus, Deneb Kaitos, is a star in the tail of the Whale, or Sea Monster.

“The other ‘neath the dusky Monster’s tail.”
Brown’s Aratus 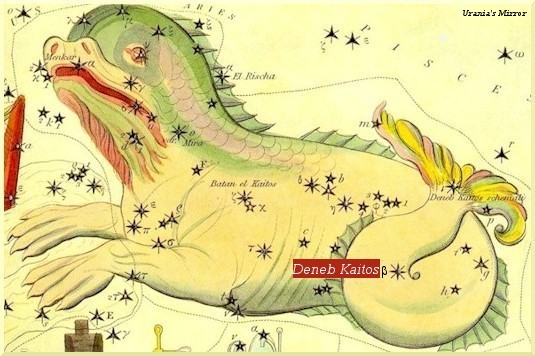 Deneb Kaitos is from the Arabian Al Dhanab al Kaitos al Janubiyy, the Tail of the Whale towards the South, i.e. the Southern Branch of the Tail. The 14th century Greco-Persian astronomer Chrysococca synonymously had (Greek) Oura tou Kaiton (tail of the whale or sea monster), arbitrarily formed from the Arabic; and the Alfonsine Tables of 1521 called it Denebcaiton

In China it was Too Sze Kung, Superintendent of Earthworks.

Although below it in lettering, this star is now brighter than alpha (α Menkar), yet both were registered gamma (γ) — i.e. of the 3d magnitude (γ Kaffaljidhma) — by the second-century Greek astronomer Ptolemy.

One third of the way towards beta (β) Andromeda (Mirach) is a group of unnamed stars from which the English astronomer Smyth (1788-1865) said that a new asterism, Testudo, was proposed.

The astrological influences of the star Deneb Kaitos

Note: This star, Deneb Kaitos, β Cetus, is listed as Difda in Robson’s book Fixed Stars and Constellations in Astrology

According to Ptolemy it is of the nature of Saturn; and, to Alvidas, of Mars, Saturn and Mercury. It causes self-destruction by brute force, sickness, disgrace, misfortune and compulsory change. [Robson, p.162.]

Inhibitions and restraints in every way, psychologically and physically. [Fixed Stars and Their Interpretation, Elsbeth Ebertin, 1928, p.12.]

With Sun: Mental disturbance, some loss keenly felt, accidents such as burns, scalds and cuts [Robson].

With Mercury: Active mind, writer or speaker upon subjects of public welfare, seeks to enact laws of benefit to the community, favorable for social affairs. [Robson, p.162.]

With Mars: Passionate, violent, subject to accidents and injuries to the head, fevers, disgrace and ruin through own acts. [Robson, p.162.]

With Jupiter: High legal or ecclesiastical position, but danger of reversal, treachery from secret enemies, loss through speculation. [Robson, p.163.]

With Uranus: Quick mind, but slow expression, many losses especially in Mercurial matters, restless, much travel, rarely remains long in one place, much energy, but accomplishes little, mind temporarily unbalanced, bad for love affairs and marriage, ailments affecting the kidneys or veins in the small of the back, peculiar death, probably alone in a forest or desert. [Robson, p.163.]