The history of the star: Cor Caroli

from p.115 of Star Names, Richard Hinckley Allen, 1889.
[A scanned copy can be viewed on this webpage 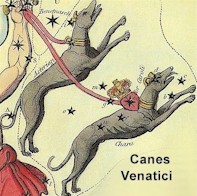 The usual illustration of the constellation, Canes Venatici, is of two Greyhounds straining at the leash held in the hand of Bootes. These Hounds are aiding Bootes in guiding the Bears (Ursa Major and Ursa Minor) around the pole star, Polaris.

The more northern Hound is named Asterion, “Starry” (as is the title of beta (β Asterion), from the little stars marking the body and because it contains the M51 Whirlpool Nebula, Copula: The southern hound is Chara; which contains this star (α) Cor Coroli, and beta (Asterion), the two brightest stars.

This star, the 12 of Flamsteed’s list of the Hounds, stands alone, marking Chara’s collar; but was set apart in 1725 by the English astronomer Halley, when Astronomer Royal, as the distinct figure Cor Caroli, not Cor Caroli II as many have it, in honor of Charles II. This was done at the suggestion of the court physician, Sir Charles Scarborough, who said that it had shone with special brilliancy on the eve of the king’s return to London on the 29th of May, 1660. It has occasionally been seen on maps as the centre of a Heart-shaped figure surmounted by a crown, and its name occurs in popular lists; but Flamsteed did not insert it on his plate of the Hounds, although he distinctly wrote of it in his manuscript under this title; and the Heart perhaps is shown in the tail-piece to the preface of the Atlas Coelestis

{p.116] It is the French Coeur de Charles; the Italian Cuor di Carlo; and the German Herz Karls

With the 15th century Tartar astronomer Ulug Beg it was Al Kabd al Asad, the Liver of the Lion — here a technical term indicating the highest position of any star within the compass of a figure reckoned from the equator. [Arabs had an enormous Lion, their early Asad, extending over a third of the heavens, of which the stars Arcturus and Spica were the shin-bones; Regulus, the forehead; the heads of Gemini, one of the fore paws; Canis Minor, the other; and Corvus, the hind quarters. Many Arab starnames come from this tradition. Star Names p.97.]

In China it was Chang Chen, a Seat.

This constellation gives a love of hunting and a penetrating mind, making those born under it faithful, keen, clever and fond of speculation. [Robson, p.34.].