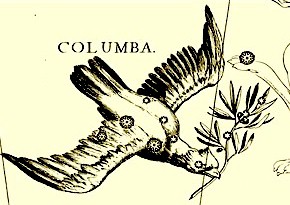 It used to be called Columba Noachi, Noah’s Dove, or the Pigeon. It represented the Dove which Noah sent out of the Ark (Argo Navis) in order to find land in the deluge. It returned with an olive branch in its mouth telling Noah that somewhere there was land. It was an emblem of the decrease of the waters and the dove represents “good news” and the discovery of new lands in navigation. Christopher Columbus was aptly named.

A dove with an olive branch has since then come to symbolize peace.

The constellation Columba, the Dove, can be viewed as either sitting on the stern (Puppis) of the celestial Ship (Argo Navis) or flying before it []. In the Argonauta expedition a white dove was sent out of the Argo Navis by Jason. Aided by Athena/Minerva, it shot between the Clashing Rocks, the Symplegades, with such speed that the rocks crashed against each other without killing the bird, only depriving it of a few tail feathers. The constellation Columba is adjacent to Puppis, the Stern of the Ship Argo Navis. An aplustre is an ornamental appendage of wood at the ship’s stern, usually spreading like a fan and curved like a bird’s feather. An old coin shows a dove perched on an aplustre [].

In Christian iconography, a dove symbolizes the Holy Spirit either personally or in his works, or the Holy Ghost. The Holy Spirit appeared as a dove at the baptism of Jesus. A columbethra, or colymbethra, columbeion, in a Greek church, is the room or font for administering baptism.

The genus Columba, of the family Columbidae, comprises the pigeons and doves. The terms dove and pigeon are used interchangeably.

A columbarium, is a dovecote, it also means a vault with niches for urns containing ashes of the dead which were placed in small arched holes in Roman villas. These urns were called columbarium from colomba a dove, from the fancied resemblance which these arched holes bore to the recesses in a dovecote [, p.103]. “Greek funerary urns depict a dove ‘drinking from a vase which symbolizes the fount of memory'” [].

Amongst themselves doves or pigeons are far from peaceful despite doves being the symbols of peace (according to Klein the word ‘fury’ is from the same root as dove). They are constantly squabbling (although not with their mates it seems). The young doves and pigeons are called ‘squabs‘. Young pigeon meat is sold under the name squab

Doves are notable for both their devotion to their mates, and also their fidelity in marriage. A pair of white doves is a popular love symbol as can be seen in the expression ‘lovey dovey’, and their cooing to their mates. In courtship each bird takes the other’s beak in its own, much like lovers kissing. Pliny said: “Though most amorous, they have a great sense of modesty and do not know adultery. Fidelity even after death, because once its companion is gone, this bird never unites with another [].” Eros (the word erotic comes from his name) is usually depicted as a young winged boy, with his bow and arrows at the ready, to either shoot into the hearts of gods or mortals which would rouse them to desire. His arrows came in two types: golden with dove feathers which aroused love, or leaden arrows which had owl feathers that caused indifference. 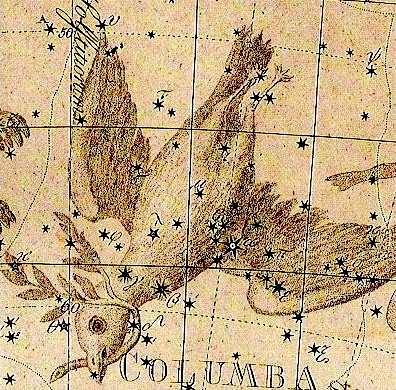 Others underneath the hunted Hare

All very dim and nameless roll along.

Columba Noae, Noah’s Dove, now known simply as Columba, is the ColombodeNoe of the French, Colomba of the Italians, and Taube of the Germans, lying south of the Hare (Lepus), and on the meridian with Orion‘s Belt.

Although first formally published by Royer in 1679, and so generally considered one of his constellations, it had appeared seventy-six years before correctly located on Bayer’s plate of Canis Major, and in his text as recentioribusColumba; one of these “more recent” being Petrus Plancius, the Dutch cosmographer and map-maker of the 16th century, and instructor of Pieter Theodor. While these are the first allusions to Columba in modern times, yet the following from Caesius may indicate knowledge of its stars, and certainly of the present title, seventeen centuries ago. [Allen notes at the end of the page: But the faintness of this constellation is against the probability of such use, and would imply that some other, and more noticeable, sky-group was known as a Dove, possibly Coma Berenices.] Translating from the Paedagogus of Saint Clement of Alexandria, he wrote:

Still it was not recognized by Bartschius twenty-one years after Bayer, nor by Tycho, Hevelius, or Flamsteed; but Halley gave it, in the same year as Royer, with ten stars; and our Gould, two centuries later in Argentina, increased the number to seventeen. It was made up from the southwestern {Page 167} outlines of Canis Major, near to the Ship (Argo Navis), — Noah’s Ark, — and so was regarded as the attendant Dove.

Smyth wrote of its modern formation, and of its nomenclature in Arab astronomy:

Royer cut away a portion of Canis Major, and constructed Columba Noachi therewith in 1679. The part thus usurped was called Muliphein from al-muhlifein, the two stars sworn by, because they were often mistaken for Soheil, or Canopus, before which they rise: these two stars are now alpha and beta Columbae (Phact and Wazn). Muliphein is recognized as comprehending the two stars called Had‘a, ground, and al-wezn, weight.

Reference already has been made to Al Muhlifain at the stars gamma, zeta, lambda Argo, delta Canis Majoris, and alpha Centauri.

Chilmead’s Treatise has this brief description of Columba:

“Starres: of which there are two in the backe of it of the second magnitude, which they call the Good messengers, or bringers of good newes: and {p.168} those in the right wing are consecrated to the Appeased Deity, and those in the left, to the Retiring of the waters in the time of the Deluge”

Heis locates alpha and beta in the back; nu in the right wing, and epsilon in the left. theta and kappa were included by Kazwini in the Arabic figure Al Kurud, the Apes.