The history of the star: Castra 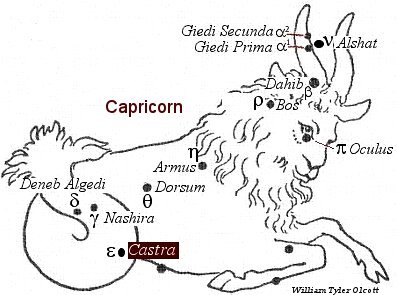 Epsilon (ε) Capricornus, Castra, is a small star in the fish-tail of the Goat.

The astrological influences of the star Castra

Of the nature of Saturn and Jupiter. It gives malevolence, destructiveness, an uncontrollable temper. [Robson, p.156.]

The star Castra is of beneficial influence, although some modern astrologers such as Robson mistake this star as being in the belly (of the goat) and thereby gave it a malevolent nature [this star, epsilon, ε, is positioned in the fish-tail of the goat; Robson has incorrectly said it is on the belly]. [Fixed Stars and Judicial Astrology, George Noonan, 1990, p.36.]