The history of the star: Baten Kaitos 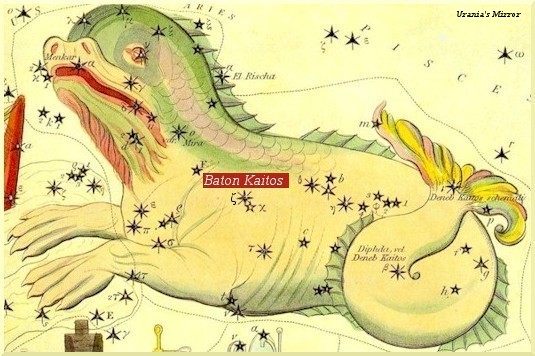 Zeta (ζ) Cetus,  Baten Kaitos, is a topaz yellow star in the Whale or Sea Monster.

Baten Kaitos is the Arabian Al Batn al Kaitos, the Whale’s Belly, although the star is higher up in the body. The Alfonsine Tables had Batenkaiton and Batenel Kaitos; and English writer on globes John Chilmead (circa 1639), Boten

In astrology it portended falls and blows.

"As the last portion of the Fishes (Pisces) rises, appears the constellation of the Whale, pursuing Andromeda in heaven as on the sea. This monster enlists its sons [those influenced astrologically by Cetus] in an onslaught on the deep and a butchery of scaly creatures; theirs will be a passion for ensnaring the deep with nets spread wide and for straitening the sea with bonds; they will confine in spacious prisons seals which deem themselves as safe as in the open sea and shackle them fast in fetters; the unwary tunny they will draw along in a network of meshes. Their capture is not the end, the fish struggle against their bonds, meet a new assault, and suffer death by the knife, and the sea is dyed, mixed with blood of its own. Furthermore, when the victims lie dead along the shore, a second slaughter is perpetrated on the first; the fish are torn into pieces, and a single body is divided to serve separate ends. One part is better if its juices [sauce] are given up, another if they are retained. In the one case a valuable fluid is discharged, which yields the choicest part of the blood, flavored with salt, it imparts a relish to the palate. In the other case all the pieces of the decaying carcass are blended together and merge their shapes until every distinguishing feature has been lost, they provide food with a condiment of general use. Or when, presenting the very likeness of the dark-hued sea, a shoal of the scaly creatures has come to a stop and cannot move for their numbers, they are surrounded and drawn from the water by a huge drag-net, and fill large tanks and wine-vats, their common endowment of liquid is exuded upon each other, for their inward parts melt and issue forth as a stream of decomposition.

"Moreover, such men [those astrologically influenced by Cetus] will be able to fill great salt-pans, to evaporate the sea, and to extract the sea’s venom [salt], they prepare a wide expanse of hardened ground and surround it with firm walls, next conduct therein waters channeled from the nearby sea and then deny them exit by closing sluice-gates, so the floor holds in the waves and begins to glisten as the water is drained off by the sun. When the sea’s dry element has collected, Ocean’s white locks (salt) are shorn for use at table, and huge mounds are made of the solid foam; and the poison of the deep, which prevents the use of sea-water, vitiating it with a  taste, they commute to life-giving salt and render a source of health." [Manilius, Astronomica, 1st century AD, book 5, p.353, 355.]

The astrological influences of the star Baten Kaitos

The Whale really means "monster". The Saturnine properties, such as inhibition, reserve, caution, solitude and simplicity are often forced onto such people, either by a mundane power or a higher power. Sometimes ideas are propagated which make life for the native trying or troublesome. To such persons, fate is usually one of change. People influenced thus, tend to depression or dwell on the thought of death. Life often is full of humiliation, renunciation and obstacles. But the position of the complete chart is always important. [Fixed Stars and Their Interpretation, Elsbeth Ebertin, 1928, p.14.]