The history of the star: Atiks 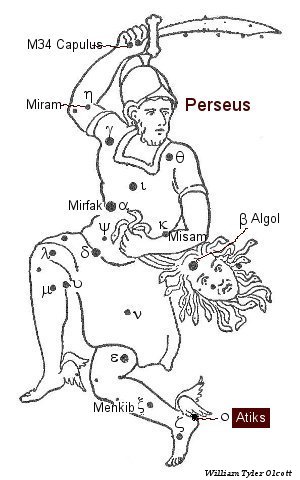 Omicron (ο) Perseus, Atiks, is a double star of 4th and 9th magnitudes marking the left sandal of the Champion.

This star marks the left sandal that Perseus is wearing. In mythology Hermes/Mercury, the messenger-god, presented Perseus with wings for his sandals so that he could move swiftly through space, these winged sandals also allowed him to hover in space which he did while conversing with Andromeda

The Arabic spelling for Atik is Al-‘Atiq, () "The shoulder" of the Pleiades (meaning close to the Pleiades – as it is in longitude) – early Arabic astronomy had many different figures for the constellations from which we inherit the star names.

Omicron (ο), of the 5th magnitude, was Gorgonea quarta