The history of the star: Asellus australis 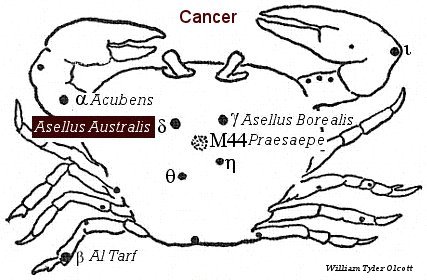 Among the stars of Cancer is a small grouping appearing on the back of the Crab’s shell which includes the Aselli, or Asses, along with Praesaepe (M44) the Beehive or Manger. Popularly this configuration was known as the “Manger”, or “Crib” in which Christ was born (it has been suggested that this is because Cancer was the “Gate of Man”).

They were the Greek Onoi, or Asses, of the second-century Greek astronomer Ptolemy and the Greeks; the Aselli, or Asini (Asellus is the singular), of the Latins, and now popularly known as The Donkeys. Other names were “A Resting Place”, “Ending of a stop”, “The Aselline Starlets”.

The Arabians similarly knew them as Al Himarain, the Two Asses. Bailey, in his Mystic of 1858, calls them the Aselline Starlets

In astrology they were portents of violent death to such as came under their influence; while to the weather-wise their dimness was an infallible precursor of rain, on which Pliny (23-79 A.D.) thus enlarges:

“If fog conceals the Asellus to the northeast high winds from the south may be expected, but if the southern star (this star Asellus Australis) is concealed the wind will be from the northeast.”

Our modern Weather Bureau would probably tell us that if one of these stars were thus concealed, the other also would be.

Inconspicuous though it be, the Babylonians used delta (this star δ Asellus australis) to mark their 13th ecliptic constellation Arku-sha-nangaru-sha-shutu, the Southeast Star in the Crab; and Brown says that the Aselli, with eta (η) and theta (θ) Cancer, and Praesaepe (M44), were the Akkadian Gu-shir-kes-da, the Yoke of the Enclosure. They also marked the junction of the nakshatras (Hindu Moon Mansions) Pushya and Aclesha (Ashlesha).

The following passage from Hind’s Solar System in regard to this star delta (δ) will be found interesting:

“The most ancient observation of Jupiter which we are acquainted with is that reported by the second-century Greek astronomer Ptolemy in Book X, chap, iii, of the Almagest, and considered by him free from all doubt. It is dated in the 83d year after the death of Alexander the Great, on the 18th of the Egyptian month Epiphi, in the morning, when the planet eclipsed the star now known as delta (δ) Cancer. This observation was made on September 3, B.C. 240, about 18h on the meridian of Alexandria.”

Myth: A Greek myth tells us that these asses were ridden by Bacchus and Vulcan in the war between the Olympians and the Titans. The braying of these animals, aided and added to the gods shouts, frightened a group of fierce giants who were coming to avenge their brothers, the Titans, to such a degree, that they fled the scene of battle. The asses were placed in the heavens flanking the mysterious glow called the Manger or Beehive  – M44 (Praesaepe) to make sure they never lack food. Manilius alludes to these outstretched stars as a Yoke

The Arabic manzilAl Nathrah, the Gap in the hair under the muzzle of the supposed immense ancient Lion that the Arabs had here, was chiefly formed by Praesaepe; but later gamma (γ Asellus borealis) and delta (δ this star Asellus Australis); the Aselli; were sometimes included, when it was Al Himarain, the Two Asses, a title adopted from the Greeks. The Arabs also knew it as Al Fum al Asad and as Al Anf al Asad, the Mouth, and the Muzzle, of the Lion, both referring to the early figure. [Star Names, Allen, p.110.

The influences of the 6th Arabic Moon Mansion Al Nathrah: The Gap or Crib. Causes love, friendship and society of fellow travelers, drives away mice, afflicts captives and causes their imprisonment. [Robson, p.71]

In this constellation, with some slight variations as to boundaries at different times in Hindu astronomy, — gamma (γ Asellus borealis) and this star delta (δ Asellus Australis) – the Aselli – always being included and occasionally eta, theta, and Praesaepe, — was located the 6th nakshatraPushya, “Flower”, or Tishiya, “Auspicious”, with Brihaspati, the priest and teacher of the gods, as presiding divinity. It was sometimes figured as a “Crescent”, and again as the “head of an Arrow” it was also called Sidhaya, “Prosperous”. [Star Names, Allen, p.110.]

The influences of the 6th Hindu Moon Mansion Pushya: Ruled by Saturn. A light asterism belonging to the Kshattriya caste (military and ruling order) and favorable for sales, art, sculpture, learning, marital love, wearing of ornaments, medicine and purchase of carriages when containing the moon. Those born on the lunar day will deal in barley, cereals, crops, will be ministers or rulers and will live by water. With Moon here at birth, native will be popular, self-controlled, learned, wealthy, and charitable. Rules houses and the face or upper lip. [Robson, p.78]

“Shining at the hinge of the year by the blazing turning-point which when recalled the Sun rounds in his course on high, the Crab occupies a joint of heaven and bends back the length of day. Of a grasping spirit and unwilling to give itself in service the Crab distributes many kinds of gain, and skill in making profits; he enables a man to carry his investment of foreign merchandise from city to city and, with an eye on steep rises in the price of corn, to risk his money upon sea-winds; to sell the world’s produce to the world, to establish commercial ties between so many unknown lands, to search out under foreign skies fresh sources of gain, and from the high price of his goods to amass sudden wealth. With heaven’s favour he also sells seasons of idleness at rates of interest to his liking, wishing the swift passage of time to add to the principal. His is a shrewd nature, and he is ready to fight for his profits.” [Astronomica, Manilius, 1st century AD, book 4, p.235.]

Legend: The Aselli (Latin for asses or donkeys) represent the asses ridden by Bacchus and Vulcan in the war between the Gods and Titans. The braying of these animals so frightened the latter that they fled, and the Gods in gratitude translated both the asses and their manger (Praesaepe) into heaven. [Robson, p.141.]

Notes: Two straw-colored stars known as the North Asellus (γ, gamma Asellus borealis) and the South Asellus (δ, delta, Asellus Australis) from the Latin asellus, a little ass, situated in the body of the Crab (Cancer).

The general influences of Aselli: According to Ptolemy both the Aselli are of the nature of Mars and the Sun, but Alvidas states that the North Asellus (Asellus borealis, identified with Balaam’s Ass) is like the Sun and Mars in sextile, and the South Asellus (Asellus Australis, called the Mare Ass, A Resting Place, and the Ending or Stop) like the Sun and Mars in semisquare. Together they give care and responsibility, with a charitable and fostering nature, but danger of violent death, serious accidents and burns. [Robson, p.141.]

The two Asses outflank the “Manger” (Praesaepe). This might be the origin, as seen in nativity pictures of the birth of Christ, of the positioning of a donkey always behind the manger*. The two Asellus correspond to the Sun and Mars, both these fixed stars are therefore to count as a positive influence, if in conjunction with the Ascendant, MC or stellar bodies of the same character, but especially if grouped with the Sun or Mars. These people will have an aggressive nature and will not take insults easily. They may, by their own lack of caution, or by being dare-devils, put their life in danger and they will not hesitate to use brutal and violent means. When the Asellus are with the Ascendant danger by large animals (horses, bulls) may exist. [Fixed Stars and Their Interpretation, Elsbeth Ebertin, 1928, p.47-48.]

*The baby born in a manger might relate to the idea of Cancer being the ‘Gate of Men’, according to Chaldaean and Platonist philosophy, through which souls descended from heaven into human bodies, or into creation. Its opposite sign Capricornus represents the ‘Gate of the Gods’ where souls of the departed ascended back to heaven.

The patient donkey is a lovable creature, but it can be very self-willed and unco-operative indeed, at times of its own choosing. The Aselli (this star and the other donkey Asellus Borealis) display all the moodiness of Cancer at its most negative, while in Leo. A conjunction with the Moon, Mercury, Venus or Neptune, well aspected, will often reveal the poet, painter, musician unusually gifted, composer, psychic ‘medium’ or astrologer. In all cases too, there is a patience for which the donkey is respected, a quality necessary for all really reliable psychism. Perhaps when the donkey is being stubborn, he is seeing something in the path which his impatient master cannot or will not see. [The Living Stars, Dr. Eric Morse, p.51.]

Asellus Australis with Sun: Unfavorable for dealing with the public and influential people, trouble in business. [Robson, p.144.]

According to Vehlow, the Chinese gave this group of stars (the Manger or Beehive and the Asses) the name ‘The Spirit of the Ancestors’ and were of the opinion that if conjunct the Moon, they would have peculiar experiences with the realms of the dead. [Fixed Stars and Their Interpretation, Elsbeth Ebertin, 1928, p.44.]

Asellus Australis with Mercury: Mental affliction. Difficulties brought about by children. Much worry and disappointment. Bad for success in spite of help from friends. Loss by fire of valuable papers. [Robson, p.144.]

With Venus: Trouble through friends, unfavorable for love and marriage, enmity of women, too fond of pleasure and society. [Robson, p.144.]

With Neptune: Ambitious but indolent; if male, handsome, pleasant and affable and a lady’s man; if female, rather masculine in appearance and character; many love affairs causing general suffering, losses through speculation, unmerited favors from friends, advantageous marriage but domestic disharmony, fevers and violent diseases, sometimes causing death in infancy. [Robson, p.144.]