The history of the star: Arneb

from p.268 of Star Names, Richard Hinckley Allen, 1889.
[A scanned copy can be viewed on this webpage 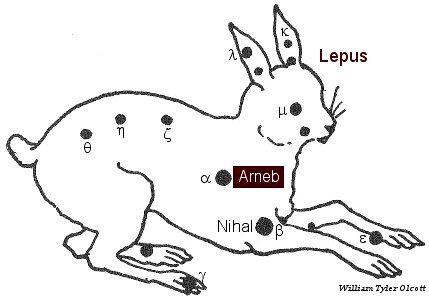 Alpha (α) Lepus, Arneb, is a double star, pale yellow and gray, in the body of the Hare.

Arneb is from the Arabian name for the whole of the Lepus constellation, but the Century Dictionary substitutes the early Arsh

Other nearby stars, presumably in Lepus, were the Chinese Kuen Tsing, an Army Well, and Ping Sing, the Star Screen.

The early Arabs designated the principal stars in Lepus — alpha (this star Arneb), beta (Nihal), gamma, and delta — as Al Kursiyy al Jabbar, and Al ‘Arsh al Jauzah, "the Chair of the Giant" and "the Throne of the Jauzah", (the throne of Orion, one of the many thrones which the Arabs had in their heavens). Al Sufi also cited the occasional Al Nihal, "the Thirst-slaking Camels", for the four bright stars of Lepus were seen by the Arabs as four camels, slaking their thirst at the nearby celestial river, the Milky Way, and were together referred to as Al Nihal. [Star Names, p.265.]

The astrological influences of the constellation Lepus

Legend: A young man of the Isle of Leros greatly desired a hare and brought some over, for none were to be found on the island. The other inhabitants also wished to keep hares, but eventually the animals multiplied to such an extent that there was not enough food for them and they devoured the corn in the fields, whereupon the inhabitants joined together and destroyed them all. [Robson, p.49.]

Influences: According to Ptolemy, Lepus is like Saturn and Mercury. It gives a quick wit, timidity, circumspection, fecundity and defiance. [Robson, p.49.]

The astrological influences of the constellation Lepus given by Manilius:

"To those born under this constellation nature all but gives wings and flight through the air – such will be the vigor of limbs which reflect the swiftness of the winds. One man will come off winner in the footrace before even receiving the signal to start; another by his quick movement can evade the hard boxing-glove and now lightly avoid, now land a blow; another can with a deft kick keep in the air a flying ball, exchanging hands for feet and employing in play the body’s support, and execute with nimble arms a volley of rapid strokes; yet another can shower his limbs with a host of balls and create hands to spring up all over his body with the result that, without dropping any of the number, he plays against himself and causes the balls to fly about his person as though in answer to his command. Such a man devotes wakeful nights to his concerns, for his energy banishes sleepiness [translator’s note: according to Aelian, the hare sleeps with its eyes open] whilst he spends happy workfree hours in games of divers kinds. [Manilius, Astronomica, 1st century AD, book 5, p.313, 315.]