The history of the star: Alrai

from p.158 of Star Names, Richard Hinckley Allen, 1889.
[A scanned copy can be viewed on this webpage 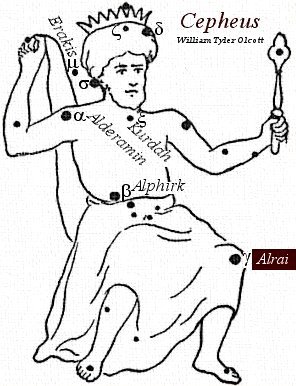 Gamma (γ) Cepheus, Alrai, is a yellow star on the left knee of the Ethiopian King.

Errai of the Palermo and Er Rai of other catalogues, but sometimes Arrai, is from Al Rai, the Shepherd, a title indigenous to Arabia.

In China it was Shaou Wei, a Minor Guard.

Gamma (γ) now marks the left knee of the King, and will be the pole-star of 2600 years hence.

Cepheus will not engender dispositions inclined to sport. He fashions faces marked by a stern demeanor, and moulds a countenance whereon is depicted gravity of mind. Such men will live on worry and will incessantly recall the traditions of a bygone age and commend old Cato’s maxims [Cato the censor].