The history of the star: Alphecca

from p.178 of Star Names, Richard Hinckley Allen, 1889.
[A scanned copy can be viewed on this webpage 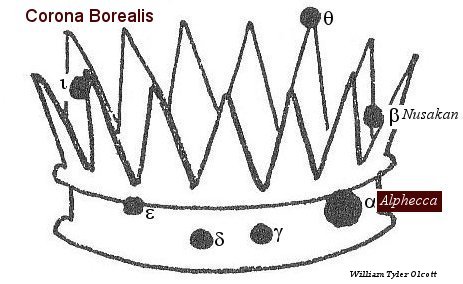 Alphecca marks the loop, or knot, of the ribbon along which are fastened the buds, flowers, or leaves of the wreath shown in early drawings with two long out-streaming ends.

Alphecca, the Alphaca of Burritt’s Atlas of 1835, was the 15th century Tartar astronomer Ulug Beg’s Al Na’ir al Fakkah, the Bright One of the Dish, this Na’ir being equivalent to the Latin word lucida (the brightest star of a constellation).

The 17th century German astronomer Bayer asserted that the Arabs knew this star as Pupilla, which also appears in the nomenclature of the constellation, Corona Borealis, with a possible clue to its derivation; but as the word belongs to the constellation Lyra, and is certainly not Arabic, we may have to recur to first principles for its origin in the classical Papilla

Munir, found with the 17th century German astronomer Bayer as of the "Babylonians,"— by whom he probably intended those gifted in astrology,— is from the Arabs, and synonymous with their Na’ir (the brightest star of a constellation). English writer on globes John Chilmead (circa 1639) gave this as Munic

{p.178} Gemma and Gemma Coronae were not used in classical times, but are later titles, perhaps from Ovid’s (43 B.C.-18?A.D.) gemmasque novem that Vulcan combined with his auro (gold) to make Ariadne’s Crown (Corona Borealis); but Spence said, in his Polymetis, that the word should be taken in its original meaning of a Bud, referring to the unopened blossoms and leaves of the floral crown, thus agreeing with the early idea of the figure. The Gema occasionally seen unquestionably is from an early type omission.

Alphecca is the central one of the seven brightest members of the group of stars in the constellation Corona Borealis, and in modern times has been Margarita Coronae, the "Pearl of the Crown", occasionally transformed into Saint Marguerite

The spectrum is of Secchi’s Solar type; and the star is receding from our system at the rate of about twenty miles a second. It has a distant 8th-magnitude companion, and culminates on the 28th of June. It marks the radiant point of the Coronids, the meteor shower visible from the 12th of April to the 30th of June.

The astrological influences of the constellation Corona Borealis

Legend: Corona Borealis represents the garland given by Venus to Ariadne on the occasion of her marriage to Bacchus after she had been forsaken by Theseus. [Robson, p.40.]

Influences: According to Ptolemy it is like Venus and Mercury. It is said to give artistic ability, love of flowers, lassitude and disillusionment, but to bring its natives to a position of command. By the Kabalists it is associated with the Hebrew letter Daleth and the 4th Tarot Trump, "The Emperor". [Robson, p.40.]

The constellation is correlative with that which concerns the air and especially the weather and its effects on agriculture. It is generally a beneficial constellation. When in mutatine subsolar aspect the native will be fond of pleasure. When in matutine culmination, however, the native may prefer pleasure to the honors of life. If matutine setting, the constellation presages a propensity for pleasure that may even bring about disease, dishonor and imprisonment. [Fixed Stars and Judicial Astrology, George Noonan, 1990, p.10.]

The astrological influences of the constellation Corona Borealis given by Manilius:

"Corona the Crown’s lustrous ring, which twinkles with varying luminosity; for the circle is dominated by a single star [Alphecca], which with passing splendor sparkles in the mid forehead and enhances with its blazing flame the bright lights of the constellation. They shine as the memorial of deserted Ariadne" [Manilius,Astronomica, 1st century AD, book 5, p.29].

"Next to rise is Erigone [Virgo]. When you behold her ascending with five degrees wrested from the sea, there will emerge from the waves the bright memorial of what was once [in her lifetime] Ariadne’s crown: and gentle will be the skills herefrom bestowed. For here shines a maiden’s gifts. The child of the Crown will cultivate a garden budding with bright flowers and slopes. Grey with olive (trees) or green with grass. He will plant pale violets, purple hyacinths, lilies, poppies which vie with bright Tyrian dyes, and the rose which blooms with the redness of blood, and will stipple meadows with designs of natural color. Or he will entwine different flowers and arrange them in garlands; he will wreathe the constellation under which he was born, and like Ariadne’s crown will be the crowns he fashions; and stems he will squeeze together, and distil mixtures (make perfume) therefrom, and will flavor Arabian with Syrian scents and produce unguents which give off a mingled fragrance, that the charm of the perfume be enhanced by the blending. His heart is set upon elegance, fashion, and the art of adornment, upon gracious living and the pleasure of the hour. Such is the endowment prescribed by the years of the Maid and the flowers of the Crown" [Manilius, Astronomica, 1st century AD, book 5, p.321.]

The astrological influences of the star Alphecca

According to Ptolemy it is of the nature of Venus and Mercury, but Alvidas considers it to be like Mars and Mercury. It gives honor, dignity and poetical and artistic ability. [Robson, p.131.]

Alphecca is noted for conveying honor, dignity and artistic ability. But like all Venusian stars it can also have its undesirable effects. Medieval astrologers, who tended to emphasize the more perverse side of astrology, asserted that Alphecca rising indicates a life spent in a variety of pleasurable pursuits by an individual who decked his body with adornments, secretly engaged in love affairs or adultery and who "bedded boys and girls" according to Firmicus Maternus. If the star is setting, disgrace will come of all this. [Fixed Stars and Judicial Astrology, George Noonan, 1990, p10.]

Because of its Venus-Mercury properties, this star, if in good position and found on the ascendant, is credited with a liking for literature, art and science, artistic talents and also success in trade and commerce. If conjunct the Sun or Moon and well placed in a map, this star promises honors and preferment. According to tradition, it is said to be associated with "The Lord of the House of Death" and if connected with Neptune and Mars, infectious diseases and poisoning are indicated. [Fixed Stars and Their Interpretation, Elsbeth Ebertin, 1928, p.64, under the name Gemma]

With Sun: Active and brilliant mind, self-seeking, subject to scandal that does not affect the position. [Robson, p.132.]

With Moon: Public honor and dignity, suffers through law, partners and neighbors, trouble through underhanded dealings of enemies but eventual triumph over them, bad for love affairs, some faithful friends, greatly esteemed by Venus and Mercury people. [Robson, p.132.]

With Uranus: Selfish, mental affliction and violence at end of life, psychic power, suffering through occultism, deceptive, many false friends, small inheritance obtained with difficulty, losses by law, enemies and mercurial affairs, sorrow through children or an adopted child, domestic trouble through own acts, danger of a violent death. [Robson, p.132.]

With Neptune: Aggressive, abrupt, disagreeable, unfavorable for money matters but gain through marriage, domestic disharmony and peculiar features in connection with marriage, not very favorable for children, gain through martial occupations, may invent something of value in surgery or chemistry, writes on occult subjects, many changes, much travel by water in early life, many enemies, liable to heart ailments, sudden or violent death. [Robson, p.132.]