The history of the star: Alkes

from p.184 of Star Names, Richard Hinckley Allen, 1889.
[A scanned copy can be viewed on this webpage 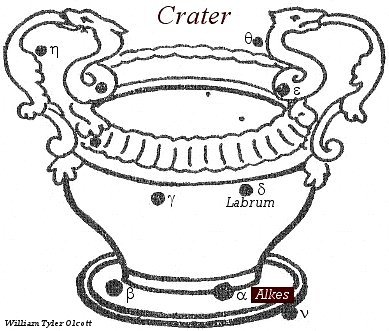 Alpha (α) Crater, Alkes, is a 4th magnitude orange star in the base of the Cup.

Alkes is our title from the 16th century French scholar Scaliger, but it also has been Alker, and in the Alfonsine TablesAlhes: all from Arabic Al Kas, "the cup", of the constellation Crater

The Latin designation for it — Fundus vasis—well describes its position at the base of the Cup.

Alpha (α) has several optical companions, and culminates on the 20th of April, about 32° nearly due south from beta (β) Leo.

The astrological influences of the constellation Crater

Legend: This constellation represents the cup given by Apollo to the raven (see Corvus) to fetch water. [Robson, p.41.]

Influences: According to Ptolemy it is like Venus and in some degree like Mercury. It gives a kind, generous, cheerful, receptive, passionate and hospitable nature, with good mental abilities, but subject to apprehension and indecision. There is a disordered life full of sudden and unexpected events, and great danger of unhappiness, but usually some eminence. [Robson, p.41.]

The astrological influences of the constellation Crater given by Manilius:

"He [those influenced by the Crater in astrology] will join your vines, Bacchus [translator’s note; ‘grapevines for the production of wine’], in wedlock to your elms; or he will arrange them on props, so that the fronds resemble the figures in a dance or, allowing your vine to rely on its own strength, he will lead it to spread out its branches as arms, and entrusting you to yourself will forever protect you from the bridal bed, seeing how you were cut from your mother (Semele, daughter of Cadmus).

"Whoever derives hence his birth and character [from the constellation Crater] will be attracted by the well-watered meadows of the countryside, the rivers, and the lakes. He will sow corn among the grapes and will adopt any other of the countless forms of cultivation that exist throughout the world as the conditions of the district will require. He will drink without stint the wine he has produced and enjoy in person the well earned fruits of his labors; neat wine will incite him to jollity, when he will drown all seriousness in his cups. Nor only on the soil will he stake his hopes for paying his yearly vows he will also go in pursuit of the grain tax (become a tax collector), and of those wares (translator’s note: papyrus, for example, or sponges) especially which are nourished by moisture or to which water clings. Such are the men to be fashioned by the Bowl, lover of all that is wet. [Manilius, Astronomica, 1st century AD, book 5, p.318-321].

The astrological influences of the star Alkes

Alkes has always portended eminence to those born under its influence. When rising the star indicates dedicated environmentalists whose love for rivers and streams lead them to be very protective regarding water resources. At a less intense level the native may become a landscape architect, a builder of canals, or in some other manner do business in merchandise connected with water. [Fixed Stars and Judicial Astrology, George Noonan, 1990, p.53.]