The history of the star: Algorab 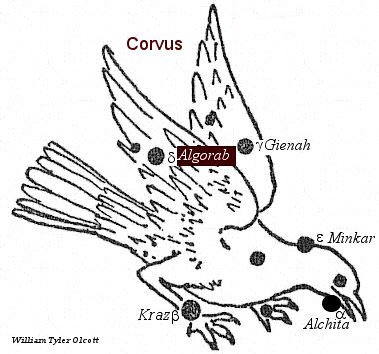 Delta (δ) Corvus, Algorab, is a double star, 3.1 and 8.5 magnitude, pale yellow and purple, on the right wing of the Raven.

Algorab, the generally received modern title, is from the Palermo Catalogue; the English astronomer Proctor (1834-1888) has Algores. It is on the right wing, and at the upper left corner of the square.

The astrological influences of the star Algorab

Of the nature of Mars and Saturn. It gives destructiveness, malevolence, fiendishness, repulsiveness and lying, and is connected with scavenging. [Robson].

A Mars-Saturn star that can show up the more troublesome side of Libra, a variation on the truth when an excuse looks to be safer. [The Living Stars, Dr. Eric Morse, p.175.]

Delays and restraint are indicated to come about by fiascoes, losses, wrong handling of matters and enmity in general. Accidents or injuries difficult to avoid. [Fixed Stars and Their Interpretation, Elsbeth Ebertin, 1928, p.60.]