The history of the star: Alderamin

from p.157 of Star Names, Richard Hinckley Allen, 1889.
[A scanned copy can be viewed on this webpage 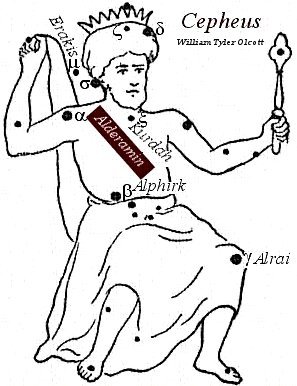 Alpha (α) Cepheus, Alderamin, is a star marking the right shoulder of the King.

Alderamin, from Al Deraimin of the Alfonsine Tables of 1521, originally was Al Dhira al Yamin, the Right Arm, but it now marks that shoulder. The 17th century German astronomer Bayer wrote it “Aderaimincorrupte Alderamin”; the 17th century German astronomer and ephemeris creator Schickard, Adderoiaminon; Assemani, Alderal jemin; while elsewhere we find Al Derab, Al Deraf, Al-redaf, and Alredat. The 13th century Persian astronomical writer Al Kazwini mentioned it as Al Firk, but, although thus found on the Borgian globe, the German astronomer Ideler (1766-1846) thinks it a mistake of that author, as a single star cannot represent a Flock, which Al Firk signifies. The 15th century Tartar astronomer Ulug Beg more appropriately called alpha (α Alderamin), beta (β Alphirk), and eta (η) Al Kawakib al Firk, the Stars of the Flock, although by this last word a Herd of Antelopes may be intended.

It will be the Polaris [the pole star] of the year 7500; Wikipedia says “This star is located near the precessional path traced across the celestial sphere by the Earth’s north pole. That means that periodically this star comes within 3° of being a pole star, much as Polaris is at present. This will next occur about the year 7500 A.D.”

Influences: According to Ptolemy, Cepheus is like Saturn and Jupiter. It gives authority and a sober mind, sometimes making its natives judges or arbitrators, but exposes to cruel and severe trials. If Mars afflicts the luminaries from Cepheus, especially if in an angle, it causes death by hanging, decapitation, crucifixion or impalement. By the Kabalists this constellation is associated with the Hebrew letter Shin and the 22nd Tarot Trump “The Fool.” [Robson, p.37.]

Cepheus will not engender dispositions inclined to sport. He fashions faces marked by a stern demeanor, and moulds a countenance whereon is depicted gravity of mind. Such men will live on worry and will incessantly recall the traditions of a bygone age and commend old Cato’s maxims [Cato the censor].

“Cepheus will also create a man to bring up boys of tender age he will lord it over his lord [dominum dominus] by virtue of the law which governs a minor and, bemused by this semblance of power, will mistake for reality the role of arrogant guardian or stern uncle which he plays.

“Offspring of Cepheus (those influenced astrologically by Cepheus) will also furnish words for the buskin of tragedy [translator’s note; on the 2nd-century Farnese globe Cepheus is depicted in the garb of a tragic actor] whose pen, if only on paper, is drenched in blood; and the paper [the audience at a performance], no less will revel in the spectacle of crime and catastrophe in human affairs. They will delight to tell of scarce one burial accorded three [translator’s note; Thyestes unwittingly ate his three sons, whom, their extremities cut off, his brother Atreus served up to him as a meal: the burial incomplete because the sons were not completely eaten, took place in the father’s stomach – Cicero, who perhaps quotes the Atreus of Accius]. The father belching forth the flesh of his sons, the sun fled in horror, and the darkness of a cloudless day; they will delight to narrate the Theban war between a mother’s issue [between Eteocles and Polynices] and one [Oedipus] who was both father and brother to his children; the story of Medea’s sons, her brother and her father, the gift which was first robe and then consuming flame, the escape by air, and youth reborn from fire. A thousand other scenes from the past will they include in their plays and perhaps Cepheus himself will also be brought upon the stage.

“If anyone is born with the urge to write in lighter vein, he will compose for presentation at the merry games scenes of comedy about the loves of headstrong youths and abducted maidens, hood-winked old men, and slaves of infinite resource. In such plays Menander made his own day live for all generations: a man whose eloquence surpassed that of his native Athens [translator’s note; and that when its language attained its richest bloom], he held up a mirror to life and enshrined the image in his works.

“Should his powers not rise to such masterpieces, the child of Cepheus will yet be fitted to perform those of others he will interpret the poet’s words, now by his voice, now by silent gesture and expression, and the lines he declaims he will make his own.

“On stage he will take the part of Romans or the mighty heroes of myth; he will assume every role himself, one after another, and in his single person represent a crowd; he will draw over his limbs the aspect of fortune’s every vicissitude and his gestures will match the songs of the chorus; he will convince you that you see Troy’s actual fall and Priam expiring before your very eyes.” [Manilius, Astronomica, 1st century AD, book 5, p.336-341]